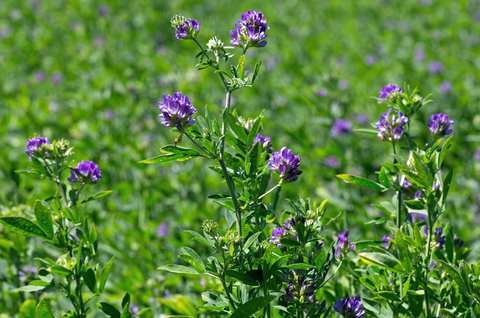 Introduction  If you have ever driven across the desert west of the United States and noticed occasional fields of bright green grass, chances are you saw alfalfa. Alfalfa is one of the oldest cultivated plants. It has been used for centuries for hay, but it has also been used for centuries as a human food. Its name comes from the Arabic, al-fac-facah, "father of all foods."

Constituents  As a food, alfalfa provides beta-carotene and vitamins C, E, and K (although it is not, as frequently claimed, a source of vitamin A).

Parts Used  Seeds, sprouts, and the aboveground parts of the plant as a bulk herb, for teas, and in capsules.

Typical Preparations  Alfalfa sprouts are found in groceries and salad bars. Capsules or tables containing alfalfa leaves or seeds as well as the bulk powdered herb are found in health food stores. The usual dose of alfalfa for tea is 1 to 2 teaspoons per cup, steeped in boiling water for 10 to 20 minutes. Capsules and tablets of whole alfalfa should be taken according to the manufacturer's recommendations.

Summary If you answer no to the question "Got milk" you should answer yes to the question "Got alfalfa"
Alfalfa is one of the best natural sources of vitamin K. This nutrient helps blood to clot by moving calcium into proteins that form a microscopic net to capture red blood cells.

Vitamin K likewise helps bones to knit by working with vitamin D and glutamic acid to activate osteocalcin. The combination of these three nutrients is essential to building good bone. Your body can not use calcium without it.  Alfalfa not only helps keep calcium in bones, it helps keep calcium out of the linings of arteries.

You've probably heard of "hardening of the arteries" known in medical terms as atherosclerosis or arteriosclerosis. Hardened arteries are a result of calcium replacing cholesterol in the lining of the blood vessel.  This calcification happens when a microscopically small amount of cholesterol becomes lodged in the arterial wall. White blood cells known as macrophages feed on cholesterol, and they make a surveillance run throughout the bloodstream to keep the arteries open.

Sometimes, however, a macrophage gets imbedded in the arterial wall and can't get out. It dies trying to feed on the excess cholesterol, and other macrophages are signaled to clean up the new and larger problem in the lining of the blood vessel. There can eventually be a visible mass (sometimes the size of the period at the end of this sentence, but sometimes a lot larger) consisting of a tiny bit of cholesterol and a whole lot of dead white blood cells.

The dead white blood cells can be replaced by artery-hardening calcium. Vitamin K from alfalfa, however, keeps that from happening. Just as vitamin K makes sure calcium moves into bones, the best information from current science is that it keeps calcium out of arterial clogs.  Preventing arteriosclerosis isnÍt quite the same thing as lowering cholesterol.  There is good preliminary evidence that alfalfa seeds can lower cholesterol levels in a condition called familial hypercholesterolemia. This form of high cholesterol does not usually respond to other medications. The levels of cholesterol after taking alfalfa for eight weeks aren't good, but they are 18 to 20% lower than the baseline and better than for statin drugs. In people who don't have familial hypercholesterolemia, there is no clear benefit for lowering cholesterol. Alfalfa is used with homeopathic remedy Lactuca virosa to stimulate milk production in breastfeeding mothers. It can also be used with blessed thistle, fenugreek, and/or marshmallow for this purpose.

Precautions  The biggest risk in using alfalfa is eating sprouts grown in contaminated water. This is also the simplest risk to avoid. Avoid limp or smelly sprouts, and rinse sprouts before use.  Nutritional naysayers offer a long list of potential objections to using sprouts, most of them based on incomplete information. For most people, alfalfa sprouts are inherently safe, but they do interact with certain medications.  If youÍre taking anti-rejection drugs for kidney transplant, don't use any form of alfalfa. The herbs and the medications you need to benefit from the transplant simply may not mix.  There's no need to panic if you are a transplant patient and you've been using alfalfa products because the risk of adverse reaction is low. The reason not to use alfalfa is that while the risk of damage to the kidneys is very remote, it is also very serious.  Similarly, you probably should treat alfalfa the same way you treat any other green, leafy vegetable if you take Coumadin. Alfalfa is rich in vitamin K that can interfere with the drugÍs anti-coagulant effects. If you are on Coumadin, you should have been advised on the safe consumption of not just alfalfa but also of all other green, leafy vegetables.

For everyone else, the main concern about alfalfa is the chemical L-cavanine. It's found in alfalfa herb, alfalfa sprouts, and alfalfa seeds, and any product made from them without heating.  L-cavanine, in extremely rare instances of excessive consumption, can cause abnormal red blood cell counts, enlargement of the spleen, or relapses of lupus. Recent epidemiological research has found that it does not cause lupus; in fact, in the most recent study, women with lupus were less likely to have eaten the herb than women who are free of the disease.  How to avoid problems with L-cavanine? You can still use alfalfa, just used in teas or as a cooked vegetable, or in its raw form up to twelve 1-gram capsules or 3 tablespoons a day. Just don't overdo.