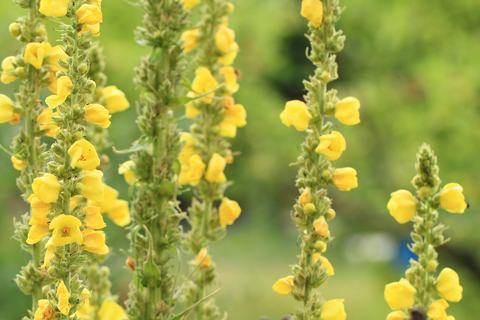 Mullein is towering biennial plant with a single stalk up to 6-1/2 feet (2 meters) bearing whorls of leaves and topped with a spike of 5-part yellow flowers. The flowers coat the mouth with a honey-like scent and a sweet taste. The name mullein itself is derived from the Latin word “mollis” which means soft. It has its origins in the Mediterranean, but has been naturalized in North America. The flowering stem was dried by the Greeks and Romans and dipped in tallow to be used as a lamp wick or torch. These torches were said to ward off evil spirits and witches, though mullein was certainly not uncommon in a witch’s herbal garden. Frazier writes in the Golden Bough that mullein was added to the bonfire on Midsummer’s eve to ward away evil from the celebration. Some ancient magical grimoires have listed powdered mullein leaf as a substitute for graveyard dust when that is unavailable.

Dried flower as an oil, and dried leaf as a tea.

Traditionally used as a tea, and is frequently combined with other herbs. May be taken as an extract if fresh material is used, and is very rarely found in capsule form. The fresh or dried flowers have traditionally been used to make an oil infusion for external use.

For educational purposes only This information has not been evaluated by the Food and Drug Administration.  This information is not intended to diagnose, treat, cure, or prevent any disease.