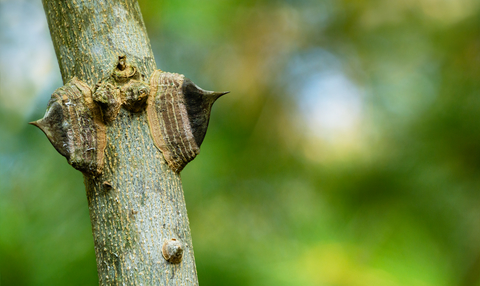 Introduction
About 1350, a book entitled the Ri Yong Ben Cao (Home Guide to Useful Medicines) first advised Chinese physicians of the medicinal benefits of prickly ash, also known as Szechuan pepper. Before prickly ash was used medicinally, however, it was applied in the Imperial Court as the sole anesthetic for the operation by which the Emperor acquired his court eunuchs. Traditional Chinese Medicine uses prickly ash to warm the "middle burner," the energies in the middle of the body that power the immune response and help digest food. Traditional herbal medicine also uses prickly ash to kill parasites and to alleviate abdominal pain, particularly when the source of the pain is a parasitic infection.

Typical Preparations
Teas or tinctures. Prickly ash powder may be used as a poultice applied to the abdomen to treat abdominal pain (recommended over teas or tinctures for this purpose). Although rare, may also be taken as capsule. Chopped prickly ash bark can be used to make teas or tinctures when combined with: ginger and/or Panax ginseng for relieving chronic abdominal pain; ginger to treat nausea and vomiting in long-term illnesses; Mume fruit and coptis or Oregon grape root for treating symptoms caused by roundworms (usually vomiting). The seed or "eyes" of prickly ash are used in teas as an acrid, bitter and cooling treatment for wheezing or swelling.

Summary
Taken internally or externally, prickly ash bark relieves chronic pain. Usually a prickly ash poultice applied to the skin over the area of pain is more effective than a prickly ash tincture or tea taken by mouth. Test the herb on a small area of skin first to make sure you are not among the very few people sensitive or allergic to the herb.

Supplemental Information
(From Herbs of Mexico - Herb Emporium) "As with so many of the healing herbs, there are similarities in their uses with some being more powerful in their results but being used for the same complaints. So it is with the Prickly Ash. Prickly Ash is best used in combination with other herbs.

Prickly ash bark is in use today, being the main ingredient in the Hoxsey formula for cancer. Prickly ash bark has also been used in treating syphilis. American Indian tribes from the northeast used Prickly ash as an expectorant, cold remedy, toothache remedy, and all-round panacea. Prickly ash is an excellent herb to use for increasing the general circulation. This lends it to being used in a great many problem areas, due to the fact that everything is dependent on good circulation. It has been used with success to increase peripheral lymphatic and blood vascular circulation and used to treat paralytic conditions.

Prickly ash has a mild central nervous system stimulating effect which aids it in improving circulation. It helps with leg cramping which is due to deficient blood and lymphatic circulation, also helping with varicose veins. It is used externally and internally for rheumatism, stomach pains, and even skin diseases. Further, due to its circulation-enhancing qualities, it is used for joint problems and rheumatic complaints due to tissue accumulations, usually uric acid.

Prickly ash can be helpful in a great many conditions such as stimulating saliva, relieving toothaches and is a booster for convalescing patients. It is good as a blood purifier and as such, helps improve the healing of slow-healing wounds. Prickly ash has been found useful in treating skin diseases. It helps improve weak digestion, colic, and stomach cramps by warming the stomach through improved circulation.

It is said that the stimulatory action of Prickly ash is slower than capsicum but has a longer lasting action and is more permanent. It is effective in opening up obstructed areas in all parts of the body and has helped with rheumatic fever. Prickly ash bark promotes general perspiration, invigorates the stomach and strengthens a sluggish digestive system. Prickly ash is good to combine with other remedies when trying to break fevers. Powdered prickly ash bark is used successfully as an application on slow healing ulcers and old wounds. It has a drawing action that stimulates and cleanses the wound, dries it up, and allows it to heal.

Prickly ash increases blood circulation throughout the body. It is beneficial where poor circulation causes soreness or pain to the bones or joints.

Prickly ash can be applied as a poultice which will improve the healing of wounds, removing infected debris as it cures.

Prickly ash is known to help increase the flow of saliva. It will help to eliminate dryness of the mouth and tongue, when such conditions are caused by liver malfunctions.

Prickly ash is also useful in paralysis of the tongue and mouth.

Precautions
Always seek a medical diagnosis when there is acute abdominal pain. Traditional Chinese Medicine teaches that prickly ash should be avoided when there is fever with profuse sweating, and used with caution during pregnancy. Prickly ash can stop lactation, and should be avoided by mothers wishing to continue nursing. Products made from the American prickly ash (Zanthoxylum americanum) can cause sunlight sensitivity. This effect is likely to be a problem only if the user (1) takes prescription ACE inhibitors for high blood pressure or (2) eats large amounts of celery or celeriac or (3) takes St. John's wort.

For educational purposes only This information has not been evaluated by the Food and Drug Administration. This information is not intended to diagnose, treat, cure, or prevent any disease.