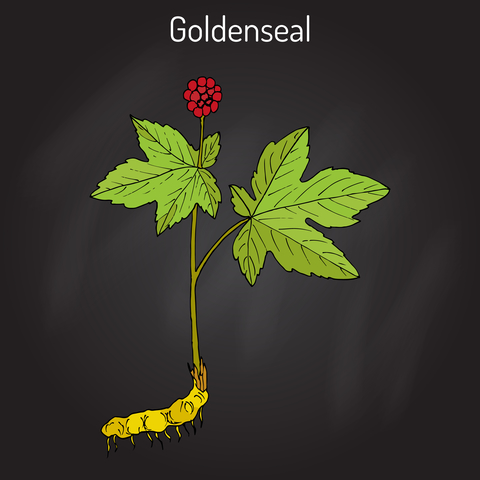 Introduction  Goldenseal root has a long history of medicinal use among Native American tribes of the northeast, its native habitat. The plant was first described to the outside world in the 1700s and was greeted with such enthusiasm as a virtual cure-all that exports of the native American plant reached 200,000 to 300,000 pounds annually. Among the maladies that goldenseal root was said to be an effective treatment for were upper respiratory infections, catarrh, intestinal infections, infections of the mucous membranes, diabetes, yeast infections and thrush. Recent research has isolated constituents in goldenseal which have broad spectrum antibiotic properties, as well as astringent and anti-inflammatory actions, giving credence to many of the traditional uses of the herb.

Typical Preparations  In tea as an infusion or decoction, in capsules, as a poultice and in liquid extract form.

Summary  Goldenseal root is considered to be an effective broad spectrum antibiotic, and is very much in demand worldwide. Its antibiotic and anti-inflammatory properties have led researchers to study goldenseal root as a possible alternative to chemical antibiotics. Goldenseal also appears to promote healthy glandular function, and may have a tonic and detoxifying effect on the entire system.