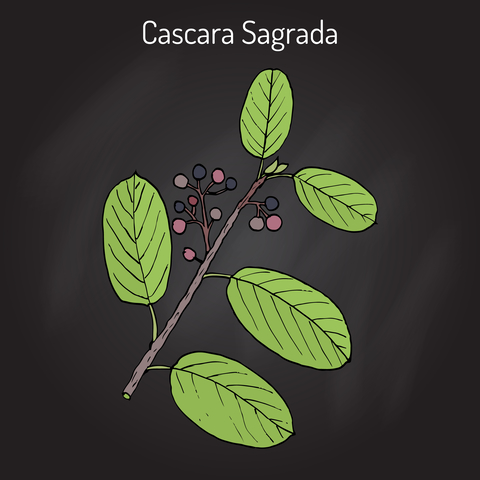 Introduction  Cascara sagrada, which translates as "sacred bark", is a deciduous shrub of the American Northwest, ranging from northern California to the Alaska panhandle in moist forests below 5,000 feet (1,500 m). It is also found in the Rockies of Idaho and Montana. The herb is harvested in the form of quills and pieces of bark, allowed to age at least a year before use in laxative preparations. Cascara sagrada is never to be used fresh and It must be aged for at least a year to break down its anthrone chemicals. (The Cascara used in Wondrous Roots' extract -  is aged) If the bark is not aged it is a purgative and will cause intense intestinal spasms and vomiting. The herb can be artificially aged by heating but some useful constituents may be lost. In recent times, it has been used as an ingredient in sun screen products, as well as a flavoring agent in foods such as candy, frozen dairy deserts, and baked goods.

Typical Preparations  Tablets and extracts. Teas are hard to drink but have a gentler laxative action.

Summary  Even conventionally oriented physicians often recommend cascara sagrada to patients suffering constipation after surgery for hemorrhoids. The 1, 8-dihydroxy-anthracenes in cascara sagrada act on the nerves in the intestinal tract, numbing the nerves that hold back stool and stimulating the nerves that propel stool downward. If you experience cramping, you've used too much. An interesting side note: American folk lore tells us that good luck in legal matters can be brought about if one wears a mojo bag filled with cascara sagrada and chews on a root of galangal, spitting the juice on the court room floor. Common logic however, would dictate that spitting on a court room floor is probably not very wise.

Precautions  For occasional use only as it is a bulk forming laxative and should be taken with adequate fluids. You should not use Cascara Sagrada or any other laxative if you have appendicitis, Crohn's disease, or ulcerative colitis. Not recommended for children under 12. Unlike buckthorn, cascara sagrada is not known to be safe for pregnant women and nursing mothers.