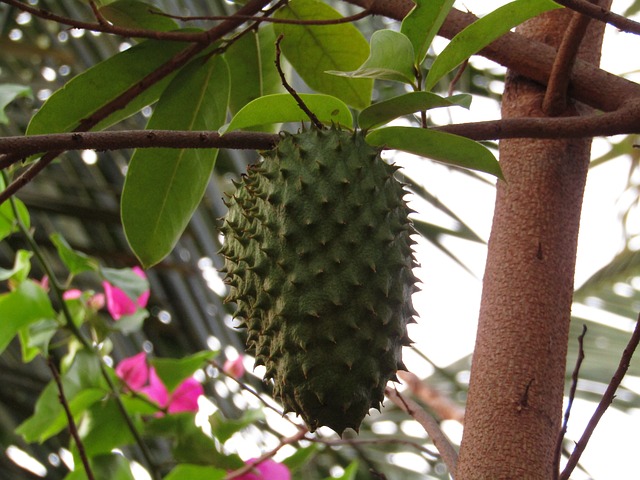 From The Healing Power of Rainforest Herbs:

Graviola is a small, upright evergreen tree, 5–6 m high, with large, glossy, dark green leaves. It produces a large, heart-shaped, edible fruit that is 15–20 cm in diameter, is yellow-green in color, and has white flesh inside. Graviola is indigenous to most of the warmest tropical areas in South and North America, including the Amazon. The fruit is sold in local markets in the tropics, where it is called guanábana in Spanish-speaking countries and graviola in Brazil. The fruit pulp is excellent for making drinks and sherbets and, though slightly sour-acid, can be eaten out of hand.

All parts of the graviola tree are used in natural medicine in the tropics, including the bark, leaves, roots, fruit, and fruit seeds. Different properties and uses are attributed to the different parts of the tree. Generally, the fruit and fruit juice are taken for worms and parasites, to cool fevers, to increase mother's milk after childbirth, and as an astringent for diarrhea and dysentery. The crushed seeds are used against internal and external parasites, head lice, and worms. The bark, leaves, and roots are considered sedative, antispasmodic, hypotensive, and nervine, and a tea is made for various disorders toward those effects.

Graviola has a long, rich history of use in herbal medicine as well as a lengthy recorded indigenous use. In the Peruvian Andes, a leaf tea is used for catarrh (inflammation of mucous membranes) and the crushed seed is used to kill parasites. In the Peruvian Amazon the bark, roots, and leaves are used for diabetes and as a sedative and antispasmodic. Indigenous tribes in Guyana use a leaf and/or bark tea as a sedative and heart tonic. In the Brazilian Amazon a leaf tea is used for liver problems, and the oil of the leaves and unripe fruit is mixed with olive oil and used externally for neuralgia, rheumatism, and arthritis pain. In Jamaica, Haiti, and the West Indies the fruit and/or fruit juice is used for fevers, parasites and diarrhea; the bark or leaf is used as an antispasmodic, sedative, and nervine for heart conditions, coughs, flu, difficult childbirth, asthma, hypertension, and parasites.

Many active compounds and chemicals have been found in graviola, as scientists have been studying its properties since the 1940s. Most of the research on graviola focuses on a novel set of chemicals called Annonaceous acetogenins. Graviola produces these natural compounds in its leaf and stem, bark, and fruit seeds. Three separate research groups have confirmed that these chemicals have significant antitumorous properties and selective toxicity against various types of cancer cells (without harming healthy cells) publishing eight clinical studies on their findings. Many of the acetogenins have demonstrated selective toxicity to tumor cells at very low dosages—as little as 1 part per million. Four studies were published in 1998 which further specify the chemicals and acetogenins in graviola which are demonstrating the strongest anticancerous, antitumorous, and antiviral properties. In a 1997 clinical study, novel alkaloids found in graviola fruit exhibited antidepressive effects in animals.

Annonaceous acetogenins are only found in the Annonaceae family (to which graviola belongs). These chemicals in general have been documented with antitumorous, antiparasitic, insecticidal, and antimicrobial activities. Mode of action studies in three separate laboratories have recently determined that these acetogenins are superb inhibitors of enzyme processes that are only found in the membranes of cancerous tumor cells. This is why they are toxic to cancer cells but have no toxicity to healthy cells. Purdue University, in West Lafayette, Indiana, has conducted a great deal of the research on the acetogenins, much of which, has been funded by The National Cancer Institute and/or the National Institute of Health (NIH). Thus far, Purdue University and/or its staff have filed at least nine U.S. and/or international patents on their work around the antitumorous and insecticidal properties and uses of these acetogenins.

In 1997, Purdue University published information with promising news that several of the Annonaceous acetogenins were " . . . not only are effective in killing tumors that have proven resistant to anti-cancer agents, but also seem to have a special affinity for such resistant cells." In several interviews after this information was publicized, the head pharmacologist in Purdue's research explained how this worked. As he explains it, cancer cells that survive chemotherapy can develop resistance to the agent originally used as well as to other, even unrelated, drugs. This phenomenon is called multi-drug resistance (MDR). One of the main ways that cancer cells develop resistance to chemotherapy drugs is by creating an intercellular pump which is capable of pushing anticancer agents out of the cell before they can kill it. On average, only about two percent of the cancer cells in any given person might develop this pump—but they are the two percent that can eventually grow and expand to create multi-drug-resistant tumors. Some of the latest research on acetogenins reported that they were capable of shutting down these intercellular pumps, thereby killing multi-drug-resistant tumors. Purdue researchers reported that the acetogenins preferentially killed multi-drug-resistant cancer cells by blocking the transfer of ATP—the chief source of cellular energy—into them. A tumor cell needs energy to grow and reproduce, and a great deal more to run its pump and expel attacking agents. By inhibiting energy to the cell , it can no longer run its pump. When acetogenins block ATP to the tumor cell over time, the cell no longer has enough energy to operate sustaining processes—and it dies. Normal cells seldom develop such a pump; therefore, they don't require large amounts of energy to run a pump and, generally, are not adversely affected by ATP inhibitors. Purdue researchers reported that 14 different acetogenins tested thus far demonstrate potent ATP-blocking properties (including several found only in graviola). They also reported that 13 of these 14 acetogenins tested were more potent against MDR breast cancer cells than all three of the standard drugs (adriamycin, vincristine, and vinblastine) they used as controls.

An interesting in vivo study was published in March of 2002 by researchers in Japan, who were studying various acetogenins found in several species of plants. They inoculated mice with lung cancer cells. One third received nothing (the control group), one third received the chemotherapy drug adriamycin, and one third received the main graviola acetogenin, annonacin (at a dosage of 10 mg/kg). At the end of two weeks, five of the six in the untreated control group were still alive and lung tumor sizes were then measured. The adriamycin group showed a 54.6% reduction of tumor mass over the control group—but 50% of the animals had died from toxicity (three of six). The mice receiving annonacin were all still alive, and the tumors were inhibited by 57.9%—slightly better than adriamycin—and without toxicity. This led the researchers to summarize; “This suggested that annonacin was less toxic in mice. On considering the antitumor activity and toxicity, annonacin might be used as a lead to develop a potential anticancer agent.”

Cancer research is ongoing on these important Annona plants and plant chemicals, as several pharmaceutical companies and universities continue to research, test, patent, and attempt to synthesize these chemicals into new chemotherapeutic drugs. In fact, graviola seems to be following the same path as another well known cancer drug – Taxol. From the time researchers first discovered an antitumorous effect in the bark of the pacific yew tree and a novel chemical called taxol was discovered in its bark - it took thirty years of research by numerous pharmaceutical companies, universities, and government agencies before the first FDA-approved Taxol drug was sold to a cancer patient (which was based on the natural taxol chemical they found in the tree bark). With graviola, it has taken researchers almost 10 years to successfully synthesize (chemically reproduce) the main antitumorous chemical, annonacin. These acetogenin chemicals have a unique waxy center and other unique molecular energy properties which thwarted earlier attempts, and at least one major pharmaceutical company gave up in the process (despite knowing how active the natural chemical was against tumors). Now that scientists have the ability to recreate this chemical and several other active acetogenins in the laboratory, the next step is to change the chemical just enough (without losing any of the antitumorous actions in the process) to become a novel chemical which can be patented and turned into a new patented cancer drug. (Naturally-occurring plant chemicals cannot be patented.) Thus far, scientists seem to be thwarted again—every time they change the chemical enough to be patentable, they lose much of the antitumorous actions. Like the development of taxol, it may well take government agenies like the National Cancer Institute and the National Institute of Health to step forward and launch full-scale human cancer research on the synthesized unpatentable natural plant chemical (which will allow any pharmaceutical company to develop a cancer drug utilizing the research as happened with taxol) to be able to make this promising therapy available to cancer patients in a timely fashion.

In the meantime, many cancer patients and health practitioners are not waiting… they are adding the natural leaf and stem of graviola (with over 40 documented naturally-occurring acetogenins including annonacin) as a complementary therapy to their cancer protocols. After all, graviola has a long history of safe use as a herbal remedy for other conditions for many years, and research indicates that the antitumorous acetogenins are selectively toxic to just cancer cells and not healthy cells—and in miniscule amounts. While research confirms that these antitumorous acetogenins also occur in high amounts in the fruit seeds and roots of graviola, different alkaloid chemicals in the seeds and roots have shown some preliminary in vitro neurotoxic effects. Researchers have suggested that these alkaloids might be linked to atypical Parkinson’s disease in countries where the seeds are employed as a common herbal parasite remedy. Therefore, using the seeds and root of graviola is not recommended at this time.

The therapuetic dosage of graviola leaf, (which offers just as high of an amount of acetogenins as the root and almost as much as the seed) is reported to be 2-3 grams taken 3 or 4 times daily. Graviola products (capsules and tinctures) are becoming more widely available in the U.S. market, and now offered under several different manufacturer’s labels in health food stores. As one of graviola’s mechanisms of action is to deplete ATP energy to cancer cells, combining it with other supplements and natural products which increase or enhance cellular ATP may reduce the effect of graviola. The main supplement which increases ATP is a common antioxidant called Coenzyme Q10 and for this reason, it should be avoided when taking graviola.

Graviola is certainly a promising natural remedy and one that again emphasizes the importance of preserving our remaining rainforest ecosystems. Perhaps—if enough people believe that the possible cure for cancer truly is locked away in a rainforest plant—we will take the steps needed to protect our remaining rainforests from destruction. One researcher studying graviola summarized this idea eloquently: “At the time of preparation of this current review, over 350 Annonaceous acetogenins have been isolated from 37 species. Our preliminary efforts show that about 50%, of over 80 Annonaceous species screened, are significantly bioactive and are worthy of fractionation; thus, this class of compounds can be expected to continue to grow at an exponential rate in the future, provided that financial support for such research efforts can be found. With the demise of the world’s tropical rain forests, such work is compelling before the great chemical diversity, contained within these endangered species, is lost.”

This statement not evaluated by the FDA. This product is not intended to diagnose, treat, cure, or prevent any disease.