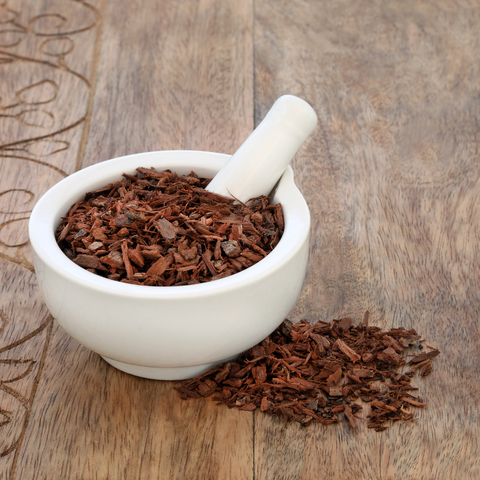 Pygeum is an evergreen tree in the rose family growing up to 150 feet (50 m) tall, found across Africa at elevations of 3,000 feet (1,000 m) or higher. South African tribes used pygeum bark to great "old man's disease," better known in mainstream medicine as benign prostatic hyperplasia (prostate enlargement). The powdered bark was traditionally used as a tea for relief of bladder and urinary disorders. The investigative work that European scientists did in determining the active constituents in the bark led to the development of the modern lipophilic (fat soluble) extracts used today. Thanks to the hundreds of studies that have been done in the past thirty years, we know that Pygeum is highly effective in helping to maintain a healthy prostate.

Tinctures. Pygeum can be used with saw palmetto, stinging nettle root, and/or bee pollen to treat benign prostatic hyperplasia, and made into hair loss prevention shampoos with saw palmetto and stinging nettle root. Typically younger men (under 30) with prostate infections need about twice as a large a dose as older men (over 50) with prostate enlargement. Sometimes found in encapsulation, although rare. May be taken as a tea, but most will find it distasteful.

At least 53 clinical studies confirm the usefulness of pygeum in treating prostate problems. A review of 18 controlled clinical trials involving 1,562 men were analyzed and summarized in the 2004 edition of the Cochrane Review. (Cochrane Reviews synthesize the results from high-quality controlled trials relevant to clinical practice in order to help people make well informed decisions about healthcare.) The studies ranged from 30 to 122 days. Although none of the studies compared Pygeum to standard pharmaceuticals that block male hormones, the review found that when compared to placebo, Pygeum africanum greatly improved urologic symptoms and urine flow.

In fact, the men using Pygeum were more than twice as likely to report an improvement in overall symptoms. The need to get up during the night to urinate was reduced by 19%, residual urine volume or dribbling was reduced by 24%, and peak urine flow was increased by 23%.

The reviewers concluded that a standardized preparation of Pygeum africanum is a useful treatment option for men with lower urinary symptoms consistent with benign prostatic hyperplasia.

Taken at recommended dosages, pygeum is non-toxic. In rare instances, there may be stomach upset, headache, nausea, or visual disturbances when the first dose is taken, but this effect usually goes away and does not recur with the second dose.

For educational purposes only. This information has not been evaluated by the Food and Drug Administration. This information is not intended to diagnose, treat, cure, or prevent any disease.Much of this information courtesy of MOUNTAIN ROSE HERBS, with full, written permission for reuse. Some of the information above comes from Smart Publications.