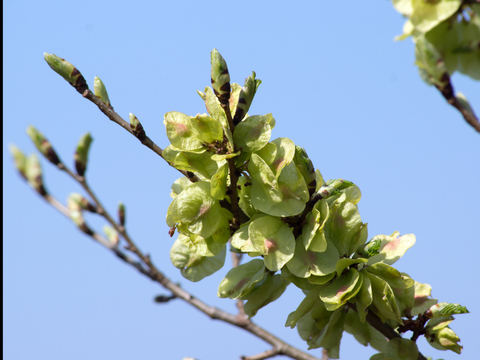 The slippery elm is a large, deciduous tree that is native to North American from Texas to Manitoba, and from Florida to Quebec. When growing in well-drained soils, it can reach a height of 60 feet (20 meters). The inner bark of the branches is collected in spring for medicinal used. Slippery elm bark added to hot water has a slippery consistency. Native Americans used soaked slippery elm bark as a natural bandage, allowing to dry over wounds. Many tribes also wrapped slippery elm around stored food to prevent spoilage. Slippery elm also served as a food during famine and for making porridge for small children and elderly persons.

The chopped bark is suitable for poultices. Use ground bark for tea. The inner bark is preferred, and this is used in the Wondrous Roots Slippery Elm Bark Extract.

Teas, infusions, poultices. Up to 5 tablespoons (15 grams) of slippery elm bark can be dissolved in a cup (240 ml) of water. Sometimes found encapsulated and as a liquid extract.

Slippery elm poultices are a mainstay of herbal medicine for treating itchy, inflamed, or irritated skin as well as cuts, scrapes, scratches, and minor burns. The mucilage in slipper elm bark also relieves inflammation and irritation in the throat and urinary tract when the herb is taken as a tea or infusion. Slippery elm also helps neutralize excess stomach acid. Scientists believe that the mucilages activate a reflex that causes the stomach to secrete more of its own protective mucus. Slippery elm is used in natural medicine to treat chronic diarrhea, esophagitis, gastritis, peptic and duodenal ulcers, and ulcerative colitis. Clinical researchers at the University of Hawaii at Manoa recently tested slippery elm as a treatment for psoriasis, acting on a suggestion in a recorded reading by the clairvoyant Edgar Cayce. The scientists found that a diet of fresh fruit and vegetables, small amounts of protein foods, and slippery elm bark with avoidance of red meat and processed foods reduced the permeability of the bowel to lectins in food and led to reductions in oozing, itching, and redness. The diet has to be followed carefully, and results may take six months.

Precautions: Since slippery elm is a food product, there is no upper limit on dosage, although about 2 tablespoons (10 grams) of the herb is the minimum amount that produces noticeable effects.