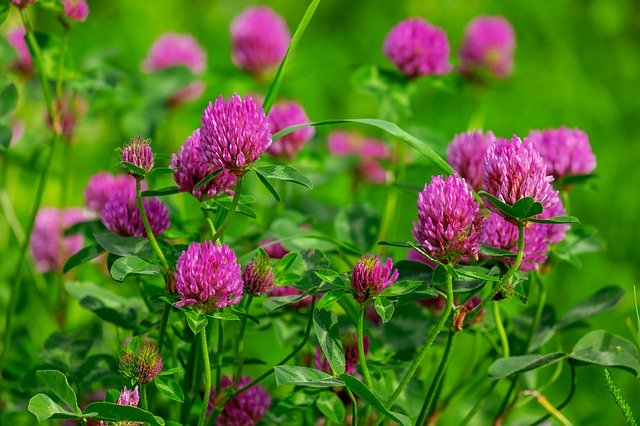 Introduction
Red clover is a perennial plant that grows wild in most temperate climates. It has been used medicinally to treat a wide variety of conditions, many of them having to do with reproductive functions and menopause. The plant itself has had many uses over the centuries. Pliny wrote that it was good for urinary tract infections if taken with wine. Druids believed that it could ward off evil spells and witches, while Medieval Christians believed that the three lobbed leaves were associated with the trinity and the four lobbed leaves as a symbol of the cross. Traditional Chinese medicine believed that it was a good tonic for colds, to purify the blood, and at one time burned it as incense. Native Americans used it as a salve for burns, as well as for bronchial problems. While these uses are traditional, modern science has recently isolated isoflavones from red clover plants that are similar in shape and action to estrogen. Among its common uses are to relieve the symptoms of PMS in premenopausal women, and in place of hormone replacement therapy in menopausal women. Studies have suggested that red clover isoflavones are more effective in reducing heat flashes than pharmaceutical preparations, and can delay bone loss associated with osteoporosis. Red clover also appears to reduce the levels of LDL (bad) cholesterol, limit the progress of benign prostate hyperplasia, and reduce the buildup of plaque that causes heart disease. Finally, red clover has been used topically to help treat psoriasis and other skin conditions, and promote healing in skin wounds while reducing infection.

Parts Used
Flowers and sometimes the leaf and flower

Typical Preparations
Tea, in capsules and extracts. May also be eaten raw and seldom in salads.

Summary
Red clover may help reduce the effects of PMS and menopause and reduce the pain associated with menstrual periods. The estrogen-like action limits growth in benign prostate hyperplasia in men and reduces the severity and frequency of hot flashes during menopause in women. Used topically, it promotes healing of skin wounds and conditions like psoriasis. Taking red clover may reduce the risk of heart disease and stroke by improving the cholesterol profile and toning the arterial walls, as well as by preventing the clumping of red blood cells that build up on the linings of arteries. The flowers are the most potent but are far harder to produce and the price reflects. A suitable alternative although less potent is the leaf and flower.

Precautions
Red clover should not be taken by pregnant or nursing women, as the effects on developing fetus and infants is not determined. There are some studies that suggest taking red clover may affect fetal development. It is also recommended that you do not take red Clover while on blood thinning medication.