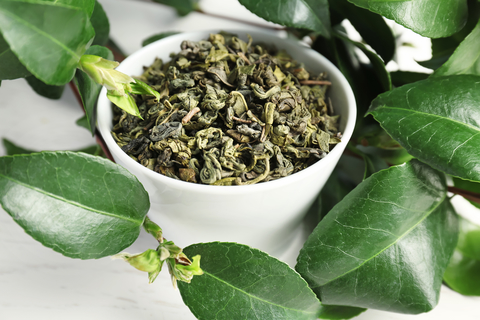 Archeological evidence suggests that people consumed tea leaves steeped in boiling water as many as 5,000 years ago. Botanical evidence indicates that India and China were among the first countries to cultivate tea. Today, tea is the most widely consumed beverage in the world, second only to water. Hundreds of millions of people drink tea around the world, and studies suggest that green tea (Camellia sinesis) in particular has many health benefits.

There are three main varieties of tea -- green, black, and oolong. The difference between the teas is in their processing. Green tea is made from unfermented leaves and reportedly contains the highest concentration of powerful antioxidants called polyphenols. Antioxidants are substances that scavenge free radicals -- damaging compounds in the body that alter cells, tamper with DNA (genetic material), and even cause cell death. Free radicals occur naturally in the body, but environmental toxins (including ultraviolet rays from the sun, radiation, cigarette smoke, and air pollution) also give rise to these damaging particles. Many scientists believe that free radicals contribute to the aging process as well as the development of a number of health problems, including cancer and heart disease. Antioxidants such as polyphenols in green tea can neutralize free radicals and may reduce or even help prevent some of the damage they cause.

Green tea has been consumed throughout the ages in India, China, Japan, and Thailand. In traditional Chinese and Indian medicine, practitioners used green tea as a stimulant, diuretic (to promote the excretion of urine), astringent (to control bleeding and help heal wounds), and to improve heart health. Other traditional uses of green tea include treating flatulence (gas), regulating body temperature and blood sugar, promoting digestion, and improving mental processes.

Green tea has been extensively studied in people, animals, and laboratory experiments. Results from these studies suggest that green tea may be useful for the following health conditions:

Population-based clinical studies indicate that the antioxidant properties of green tea may help prevent atherosclerosis, particularly coronary artery disease. (Population-based studies means studies that follow large groups of people over time or studies that are comparing groups of people living in different cultures or with different dietary habits.) Researchers aren't sure why green tea reduces the risk of heart disease by lowering cholesterol and triglyceride levels. Studies show that black tea has similar beneficial effects. In fact, researchers estimate that the rate of heart attack decreases by 11% with consumption of 3 cups of tea per day. In May 2006, however, the U.S. Food and Drug Administration (FDA) rejected a petition from teamakers to allow tea labels to claim that green tea reduces the risk of heart disease. The FDA concluded that there is no credible evidence to support qualified health claims for green tea or green tea extract reducing the risk of heart disease.

Several population-based clinical studies have shown that both green and black teas help protect against cancer. For example, cancer rates tend to be low in countries such as Japan where people regularly consume green tea. However, it is not possible to determine from these population-based studies whether green tea actually prevents cancer in people. Emerging clinical studies suggest that the polyphenols in tea, especially green tea, may play an important role in the prevention of cancer. Researchers also believe that polyphenols help kill cancerous cells and stop their progression.

Ovarian cancer. In a clinical study conducted on ovarian cancer patients in China, researchers found that women who drank at least one cup of green tea per day survived longer with the disease than those who didn' t drink green tea. In fact, those who drank the most tea, lived the longest. Other studies found no beneficial effects.

Prostate cancer. Laboratory studies have found that green tea extracts prevent the growth of prostate cancer cells in test tubes. In a large clinical study conducted in Southeast China researchers found that the risk of prostate cancer declined with increasing frequency, duration and quantity of green tea consumption. However, both green and black tea extracts also stimulated genes that cause cells to be less sensitive to chemotherapy drugs. Given this potential interaction, people should not drink black and green tea (as well as extracts of these teas) while receiving chemotherapy.

Skin cancer. The main polyphenol in green tea is epigallocatechin gallate (EGCG). Scientific studies suggest that EGCG and green tea polyphenols have anti-inflammatory and anticancer properties that may help prevent the onset and growth of skin tumors.

Green tea may help reduce inflammation associated with Crohn's disease and ulcerative colitis, the two types of IBD. If green tea proves to be helpful for preventing colon cancer, this would be an added benefit for those with IBD because they are at risk for colon cancer.

Green tea has been used traditionally to control blood sugar in the body. Animal studies suggest that green tea may help prevent the development of type 1 diabetes and slow the progression once it has developed. People with type 1 diabetes produce little or no insulin, a hormone that converts glucose (sugar), starches, and other foods into energy needed for daily life. Green tea may help regulate glucose in the body.

A few small clinical studies have found that daily supplementation of the diet with green tea extract powder lowered the hemoglobin A1c level in individuals with borderline diabetes.

Results from several animal and human studies suggest that one of the polyphenols present in green tea, known as catechin, may help treat viral hepatitis (inflammation of the liver from a virus). In these studies, catechin was isolated from green tea and used in very high concentrations. It is not clear whether green tea (which contains a lower concentration of catechins) confers these same benefits to people with hepatitis.

Clinical studies suggest that green tea extract may boost metabolism and help burn fat. One study confirmed that the combination of green tea and caffeine improved weight loss and maintenance in overweight and moderately obese individuals. Some researchers speculate that substances in green tea known as polyphenols, specifically the catechins, are responsible for the herb's fat-burning effect.

Drinking green tea has been found effective in a small clinical study for dental caries, or tooth decay. More studies need to be performed. Green tea may also be useful in inflammatory diseases, such as arthritis. Research indicates that green tea may benefit arthritis by reducing inflammation and slowing cartilage breakdown. Chemicals found in green tea may also be effective in treating genital warts and preventing symptoms of colds and influenza. Studies also show that drinking green tea is associated with reduced risk of all cause mortality.

Green, black, and oolong tea are all derived from the leaves of the Camellia sinensis plant. Originally cultivated in East Asia, this plant grows as large as a shrub or tree. Today, Camellia sinensis grows throughout Asia and parts of the Middle East and Africa.

People in Asian countries more commonly consume green and oolong tea while black tea is most popular in the United States. Green tea is prepared from unfermented leaves, the leaves of oolong tea are partially fermented, and black tea is fully fermented. The more the leaves are fermented, the lower the polyphenol content (See: "What's It Made Of?") and the higher the caffeine content. Green tea has the highest polyphenol content while black tea has roughly 2 - 3 times the caffeine content of green tea.

Pediatric Use:  There are no known scientific reports on the pediatric use of green tea, but it is consumed by children traditionally.

Adult Use:  Depending on the brand, 2 - 3 cups of green tea per day (for a total of 240 - 320 mg polyphenols) or 100 - 750 mg per day of standardized green tea extract is recommended. Caffeine-free products are available and recommended.

The use of herbs is a time-honored approach to strengthening the body and treating disease. However, herbs contain active substances that can trigger side effects and interact with other herbs, supplements, or medications. For these reasons, people should take herbs with care, under the supervision of a practitioner knowledgeable in the field of botanical medicine.

People who drink excessive amounts of caffeine (including caffeine from green tea) for prolonged periods of time may experience irritability, insomnia, heart palpitations, and dizziness. Caffeine overdose can cause nausea, vomiting, diarrhea, headaches, and loss of appetite. If you are drinking a lot of tea and start to vomit or have abdominal spasms, you may have caffeine poisoning. If your symptoms are severe, lower your caffeine intake and see your health care provider.

If you are being treated with any of the following medications, you should not drink green tea or take green tea extract without first talking to your health care provider:

Adenosine -- Green tea may inhibit the actions of adenosine, a medication given in the hospital for an irregular (and usually unstable) heart rhythm.

Benzodiazepines -- Caffeine (including caffeine from green tea) has been shown to reduce the sedative effects of benzodiazepines (medications commonly used to treat anxiety, such as diazepam and lorazepam).

Blood Thinning Medications (Including Aspirin) -- People who take warfarin, a blood thinning medication, should not drink green tea. Since green tea contains vitamin K, it can make warfarin ineffective. Meanwhile, you should not mix green tea and aspirin because they both prevent platelets from clotting. Using the two together may increase your risk of bleeding.

Chemotherapy -- The combination of green tea and chemotherapy medications, specifically doxorubicin and tamoxifen, increased the effectiveness of these medications in laboratory tests. However, these results have not yet been demonstrated in studies on people. On the other hand, there have been reports of both green and black tea extracts stimulating a gene in prostate cancer cells that may cause them to be less sensitive to chemotherapy drugs. Given this potential interaction, people should not drink black and green tea (as well as extracts of these teas) while receiving chemotherapy for prostate cancer in particular.

Clozapine -- The antipsychotic effects of the medication clozapine may be reduced if taken fewer than 40 minutes after drinking green tea.

Ephedrine -- When taken together with ephedrine, green tea may cause agitation, tremors, insomnia, and weight loss.

Lithium -- Green tea has been shown to reduce blood levels of lithium (a medication used to treat manic/depression).

Monoamine Oxidase Inhibitors (MAOIs) -- Green tea may cause a severe increase in blood pressure (called a "hypertensive crisis") when taken together with MAOIs, which are used to treat depression. Examples of MAOIs include phenelzine and tranylcypromine.

Oral Contraceptives -- Oral contraceptives can prolong the amount of time caffeine stays in the body and may increase its stimulating effects.

Phenylpropanolamine -- A combination of caffeine (including caffeine from green tea) and phenylpropanolamine (an ingredient used in many over-the-counter and prescription cough and cold medications and weight loss products) can cause mania and a severe increase in blood pressure. The FDA issued a public health advisory in November 2000 to warn people of the risk of bleeding in the brain from use of this medication and has strongly urged all manufacturers of this drug to remove it from the market.

Belza A, Toubro S, Astrup A. The effect of caffeine, green tea and tyrosine on thermogenesis and energy intake.Eur J Clin Nutr. 2007; [Epub ahead of print].

This information courtesy of the University of Maryland Medical Center