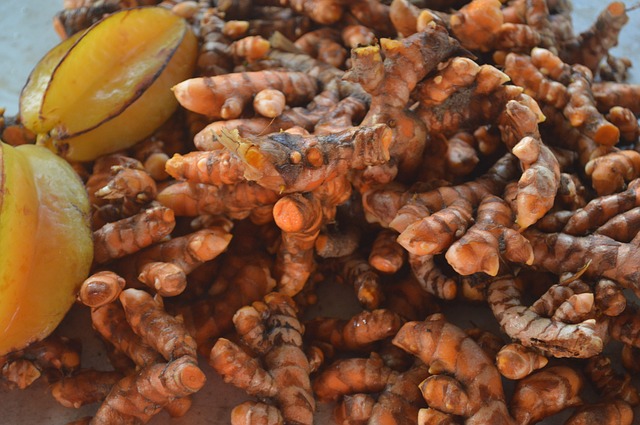 Introduction
Turmeric is a tropical perennial plant in the same family as ginger, native to India, and cultivated throughout the tropics around the world. Growing to a height of about three feet (one meter), it bears pairs of lance-shaped leaves of alternate sides of the stem. At the base of the stem, there is a knobby rhizome somewhat resembling ginger. Most herbal traditions use turmeric to "invigorate the blood." It is so useful as a medicine that the Chinese names for the plant both call it "gold," chuan yu jin, river constrained gold, and guang yu jin, plain constrained gold. In ancient times, turmeric was reserved for patients who were relatively weak.

Typical Preparations
Teas, tinctures, and poultices. Combined with dong quai for treating menstrual cramps. Ayurvedic medicine uses turmeric with guggul for treating liver disease. Many of the healing of benefits of turmeric have been attributed to curcumin, a group of antioxidant compounds found in the rhizome. Although curcumin is available as a standardized extract, the whole herb may be more beneficial for you than the curcumin extract: Only very small amounts of curcumin are absorbed into the bloodstream. Turmeric as a whole herb stays in the digestive tract longer than curcumin, releasing antioxidant curcumin along with other beneficial substances.

Summary
Turmeric is the main anti-inflammatory herb of Ayurvedic medicine. Ayurveda uses turmeric to treat diseases of the liver and to relieve inflammation. Laboratory tests have found that turmeric in antioxidant and antimutagenic (13,14), that is, it potentially helps prevent new cancers that are caused by chemotherapy or radiation used to treat existing cancers. Turmeric in the diet may prevent pain of arthritis, bursitis, and tendonitis. A volatile oil in the spice is as effective in relieving pain, under laboratory conditions, as equal amounts steroids. The antioxidants in turmeric fight atherosclerosis by deactivating platelet-activating facto (POAF). This protein seals leaks in blood vessels by stimulating the growth of a protein "net" on which a cholesterol plaque can form. Curcumin in turmeric helps prevent hardening of the arteries in people who have diabetes, and also helps stop the loss of protein through the kidneys. In the laboratory, the antioxidants in turmeric kills cultures of cancer cells from the skin, bloodstream, and ovaries. Curcumin may stop the action of a livery enzyme that activates environmental toxins into carcinogen forms, and may be especially useful in deactivating the carcinogens in cigarette smoke and chewing tobacco. Turmeric in the diet increases the production of enzymes that digest fats and sugars, and stop cholesterol from forming gallstones. Turmeric prevents the release of histamine in the stomach, quelling nervous stomach and counteracting food allergies, and it fights gum inflammation by halting the action of a gene that creates irritant chemicals. With the irritation, bacteria cannot find a place to grow, and the absence of bacteria reduces both bad breath and gingivitis. Of course, if you use turmeric to prevent bad breath, you shouldn't eat curries made with garlic.

Precautions
As is the case with so many herbs, turmeric should be used in moderation. Too much turmeric used for extended periods of time may cause stomach distress. Since turmeric is included in Ayurvedic formulas for birth control, women trying to become pregnant should limit their consumption of the herb, and it should be avoided entirely while pregnant. Excessive use of turmeric should also be avoided in people with congestive heart failure. The curcumin in turmeric activates a gene called p53. This gene deactivates cancer cells, but it also deactivates damaged cells in the heart.