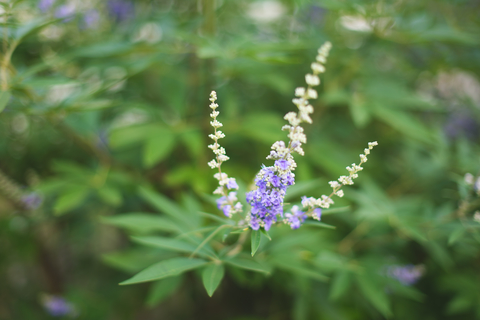 Introduction  Chaste tree is a small shrub with lance shaped leaves and purple flowers that are native to the eastern Mediterranean and easily grown in warm climates around the world. Its peppery fruit has been used for over two thousands years, or at least since the time of the Greek physician Dioscorides, who recommended it in beverages intended to help the wives of soldiers remain chaste while their husbands were in battle. The fruit was used by both men and women in ancient Greece and Rome and by monks during the Middle Ages to suppress sexual desire. Pliny the Elder noted that Athenian maidens would put the leaves under their beds during the festival of Thesmophoria to help preserve their chastity. Dioscorides, in hisDe Materia Medica, claimed that when mixed with pennyroyal, it was a remedy for headaches that go concurrently with menstrual difficulties. He also noted that it could be used as a topical antidote for spider and snake bites. In the Medical Formulary of Al Samarquandi (circa 1200 CE), it was said to be a vital ingredient in a "black remedy" that was said to cure "insanity, the stroke of madness, and epilepsy". It is still sold in Egyptian bazaars as a "calming agent to hysteria". In Germany, chaste tree is a common treatment for gynecological disorders and it has recently become popular in the U.S. as well.

Typical Preparations  Usually used as a tincture, however may be cracked and sprinkled on food, producing a slight pepper taste or as a tea infusion.

Summary  Chaste berry has been used for centuries to treat constipation, flatulence, and hangovers, and to bring on menstruation and lactation. In modern herbal medicine, the herb is mainly used to treat breast swelling and breast pain caused by excessive secretion of the hormone prolactin during PMS or cyclic mastalgia. The herb can lengthen the proliferative (first) phase of the menstrual cycle, and also relieve water weight, headache, and fatigue.

Precautions  Men shouldn't take chaste berry. Testicular atrophy could result after repeated use. Not recommended during pregnancy. Binging on sugar, alcohol, or marijuana will block the herb's action on dopamine receptors in the brain and cancel out its effects. Not recommended while pregnant.