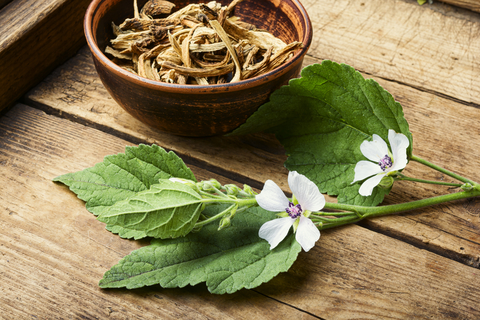 Introduction  Marshmallow is a perennial herb native throughout damp areas of northern Europe and western Asia. It is now naturalized to the Atlantic coast of the United States and used as an ornamental for its pointed foliage and purple flowers. References to marshmallow root as a healing herb are found in Homer's Iliad, written over 2,800 years ago. Its genus ("first") name Althaea comes from the Greek "altho," to cure, and its order name, Malvaceae, is derived from the Greek "malake." Soft Marshmallow root was widely used in traditional Greek medicine. The use of the herb spread from Greece to Arabia and India, where it became an important herb in the Ayurvedic and Unani healing traditions. All of these traditions used marshmallow as a soothing agent: demulcent, diuretic, emollient, and vulnerary.

Parts Used  The dried root. Reputable suppliers test the product for its ability to swell when mixed with water. Marshmallow root does not swell as much as marshmallow leaf when placed in water.

Precautions  Marshmallow root is completely non-toxic, but its mucilage can interfere with the absorption of other medicines if taken at the same time. The asparagine in the root can cause a mild odor in the urine, but has no other physiological effect.