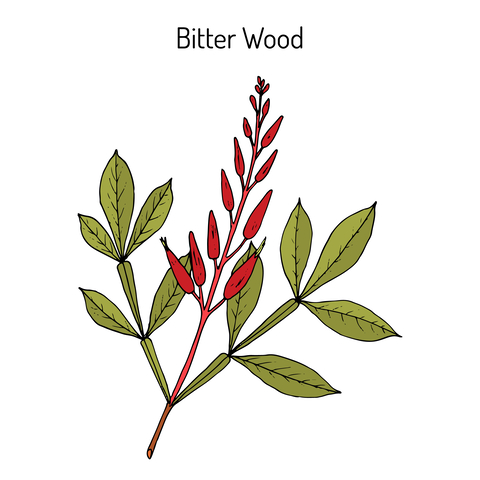 Quassia is indigenous to Brazil, Peru, Venezuela, Suriname, Colombia, Argentina, and Guyana where it is used extensively for fevers, malaria, parasites, digestive problems, and gallbladder and liver disease. The herb is extremely bitter, the name amargo means "bitter" in Spanish. The general name, Quassia, comes from a man named Quassi of Surinam who had incredible success using it as a secret ingredient for a particularly bad fever that was running rampant through Surinam. The "secret" was sold to a Swedish entrepreneur, who took it home to Sweden in 1756, where shortly thereafter it found great success throughout Europe as a stomach tonic. The tall deciduous trees are also known for another interesting trait: no bugs or insects ever bother the trees. This is due to a component in the resin called quassin, which is an incredibly effective insecticide. West Indians in particular use a water extract for an insecticide on their fields. Quassin extract is said to by many times more bitter than quinine, and is used as an ingredient in many medications that would normally contain quinine.

Quassin (gives Quassia it's bitterness), phytochemicals quassimarin and simalikalactone D. Quassimarin has demonstrated antileukemic and antitumorous properties in various studies, and simalikalactone D has been documented to have antimalarial, antiviral, antitumor, and anticancer activities. Other quassinoids have demonstrated anti-amebic actions in vivo and in vitro.

Usually taken in the form of an infusion, in capsules, or tincture.

In the Amazon rainforest, Quassia is considered a tonic, and is used for malaria, fevers, as a bitter digestive aid, an insecticide, for liver and gallbladder problems, snake bites, back spasms, hepatitis, as a blood cleanser, mild laxative, for diarrhea, intestinal worms, dysentery, dyspepsia, excessive mucus, expelling worms, intestinal gas, stomachache, anemia, for liver and gastrointestinal disorders, tuberculosis, kidney stones, and for gallstones. Within the United States, Quassia is becoming more well-known and is utilized for stomach, gallbladder, digestive problems, as a laxative, amebicide, insecticide, for lice, and to expel intestinal worms. Quassia is considered one of the best stomach bitters, and is especially useful for those with debility of the stomach or intestinal structures, and inactivity of the secreting organs. David Hoffman recommends it as an excellent remedy for dyspeptic conditions, to stimulate production of saliva and digestive juices, and to increase the appetite (as well as for lice infestations and threadworms). He also notes, "It may safely be used in all cases of lack of appetite such as anorexia nervosa and digestive sluggishness." Quassia chips are soaked in water and the water is used to discourage children from sucking their thumbs.

Quassia should not be used during pregnancy. Quassia has been documented to have an antifertility effect in studies and men undergoing fertility treatment or those wishing to have children should avoid using this herb. Large amounts of Quassia can irritate the mucous membrane of the stomach leading to nausea and vomiting.

Unless otherwise stated, this information courtesy of MOUNTAIN ROSE HERBS, with full, written permission for reuse.