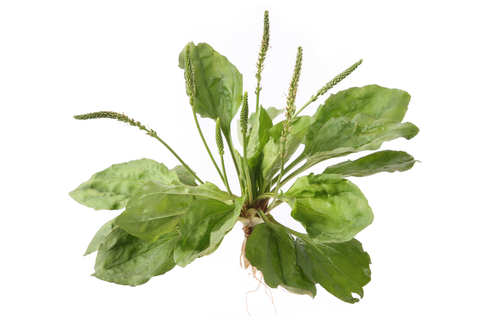 Introduction The common plantain grows throughout the US, but is of Eurasian descent, and is now naturalized throughout the world. Legend has it that Alexander the Great discovered it and brought it with him back to Europe in 327 BCE. It has been referred to as the Whiteman's Foot by Native Americans, as wherever they went, it seemed to spring up. and in some places, it is seen as a noxious, invasive weed. It is, however, a useful little plant. It has been used by many cultures the world over, and the Saxons considered it one of their nine sacred herbs. It was considered an early Christian symbol of the path followed by the devout and many cultures today refer to it as an aphrodisiac. The leaves are quite edible, and often used raw in salads and cooked as greens. Older leaves have a stronger, sometimes objectionable flavor, and can be tough and stringy, but can be used to make tea. Plantain is very high in vitamins A and C and in calcium. Medicinally, Native Americans used plantain leaves to relieve the pain of bee stings and insect bites, stop the itching of poison ivy and other allergic rashes, and promote healing in sores and bruises. Plantain tea can be used as a mouthwash to help heal and prevent sores in the mouth, and as an expectorant. Most recently, plantain is being marketed as a stop smoking aid, adding one more use to the list of ways that this versatile herb is useful.

The whole leaf and some stem is acceptable.

Eaten raw and fresh in salads, as a tea, in tincture form and as an external compress.

Plantain has been used as a panacea in some Native American cultures and with some very good reasons. Many of its active constituents show antibacterial and antimicrobial properties, as well as being anti-inflammatory and antitoxic. The leaves, shredded or chewed, are a traditional treatment for insect and animal bites; the antibacterial action helps prevent infection, and the anti-inflammatory helps to relieve pain, burning, and itching. There is some investigation ongoing to study its affects on lowering blood sugar.

For educational purposes only This information has not been evaluated by the Food and Drug Administration.This information is not intended to diagnose, treat, cure, or prevent any disease.