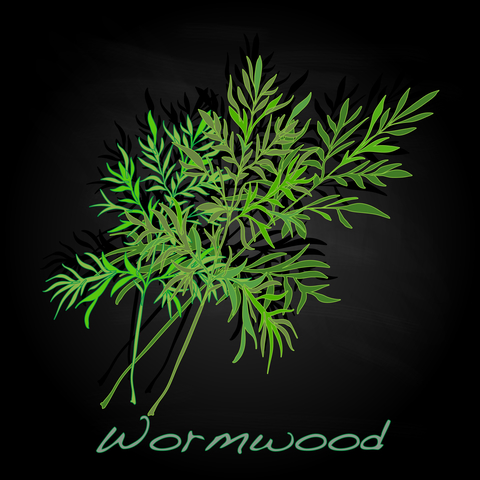 Introduction
"As bitter as wormwood," goes an ancient proverb, and wormwood is indeed one of the most bitter of all plants. Named after the Greek goddess Artemis, the plant is said to have been delivered to Chiron, the father of medicine, by the goddess herself. Wormwood, often called absinth, has hallucinogenic and psychoactive properties and is said to affect the brain in much the same way as THC. Wormwood is often used as a companion plant, as it has strong pest repellant properties, and deters the growth of weeds. Its best known use is in the making of absinthe, a liquor distilled from wormwood which is said to have hallucinogenic effects. Such famous men as Hemingway and Van Gogh attributed part of their creativity to absinth induced visions. True absinthe is illegal in many countries, but wormwood is also used as a color and flavoring in other liqueurs, notably vermouth. The absinthe recommended by the ancient physicians from the Egyptian through the Greeks was likely a very different recipe than that with which we are familiar today. It is most likely that it was simply wormwood soaked in wine or spirits, imparting the medicinal value of the plant to the alcohol. Among its traditional uses, Pliny noted that victorious champions at the races often drank a cup of wine in which wormwood had been soaked to remind them that victory was bitter as well as sweet.

Typical Preparations
Soaked in wine or other spirits, as a tea, in some dream and sleep pillows, as a liquid herbal extract and sometimes found in capsules.

Summary
Wormwood's rather unsavory reputation and the banning of absinthe in the United States has added to the glamour and mystery surrounding wormwood. The active constituent thujone - most often absinthol - can be toxic in high doses, and may induce hallucinogenic visions. Wormwood has a long association with both bitterness and liquor, being an ingredient in Pernod, vermouth, absinthe and other alcoholic spirits.

Herbalists also strongly recommended or made use of wormwood extracts to treat intestinal worms, particularly pinworms and roundworms. Due to its anti-parasitic properties, wormwood oils or extracts are sometimes used as insect repellents, and a local insecticide to be used in gardens and local application on pets. Herbalists believe the power of wormwood extracts are highly useful in treating inflammation of the gall bladder, hepatitis, jaundice, fever, stomach and liver infections. In some cases it is believed to be effective in treating even mild cases of mild depression.

In almost all herbal preparations made from the herb, wormwood is never used in isolation. Wormwood extracts are usually mixed with other herbs with medicinal properties such as peppermint or caraway in order to prepare herbal remedies. A blend of wormwood extract, peppermint extracts, and caraway extracts are useful in treating heartburn and irritable bowel syndrome (IBS). As a conventional form of medicine, herbalists would use absinthe wormwood or its extracts to enhance digestion, to get rid of worm parasites, and to induce menstruation. Wormwood extracts were also revered by naturalists and herbalists as useful curatives for liver and gallbladder disorders.

Precautions
Wormwood contains constituents that may be toxic if ingested in large amounts and for extended periods of time. Not to be used while pregnant.