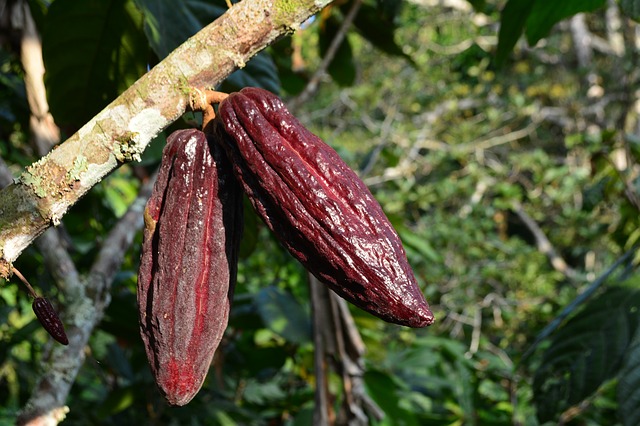 Cacao is the seed of a fruit of an Amazonian tree that was brought to Central America during or before the time of the Olmecs. Cacao beans were so revered by the Mayans and Aztecs that they used them as money.

In 1753 Carl von Linnaeus, the 18th-century Swedish scientist, thought that cacao was so important that he named the genus and species of this tree himself. He named this tree: Theobroma cacao, which literally means "cacao, the food of the gods." As we approach 2012, and the patriarchal systems are crumbling, we decided to rename it "Cacao, food of the goddess".

Cacao beans contain no sugar and between 12% and 50% fat depending on variety and growth conditions.  There is no evidence to implicate cacao bean consumption with obesity.

Raw cacao is contains hundreds of chemicals, is high in magnesium, iron, chromium, tryptophan,  and antioxidants. It also contains PEA and anandamide.

Contrary to popular opinion, cacao is a poor source of caffeine. A typical sample of cacao nibs or cacao beans will yield anywhere from zero caffeine to 1,000 parts per million of caffeine (less than 1/20th of the caffeine present in coffee). In February 2008, Dr Gabriel Cousens discovered in clinical tests on healthy people that cacao does not elevate blood sugar in the same way as a caffeine containing food or beverage. In fact, Dr Cousens found that cacao has less of an effect on blood sugar than nearly any other food.

Cacao is remarkably rich in sulfur and magnesium. Cacao seems to be the number one source of magnesium of any food. This is probably the primary reason women crave chocolate during their period. Magnesium is associated with balanced brain chemistry, strong bones, and happiness. Magnesium is the most deficient major mineral in the standard USA diet; approximately 70% of us are deficient in this crucial macro-mineral!

"Every study on chocolate is pointing to the same conclusion: there is something in chocolate that is really good for us. That something is the raw cacao bean, the nut that all chocolate is made from. The cacao bean has always been and will always be Nature's #1 weight loss and high-energy food. Cacao beans are probably the best kept secret in the entire history of food."
- David Wolfe, co-author of Naked Chocolate: The Astonishing Truth About The World's Greatest Food.

Cacao is high in the beauty mineral sulphur. Sulfur is associated with strong nails, hair, beautiful, shiny skin, and a clean liver and pancreas.

Phenylethylamine (PEA) is found in chocolate. PEA is an adrenal-related chemical that is also created within the brain and released when we are in love. This is one of the reasons why love and chocolate have a deep correlation. PEA also plays a role in increasing focus and alertness.

A neurotransmitter called anandamide, has been isolated in cacao. Anandamide is also produced naturally in the brain. Anandamide is known as the bliss chemical because it is released while we are feeling great. Cacao contains enzyme inhibitors that decrease our bodies' ability to breakdown anandamide. This means that natural anandamide and/or cacao anandamide may stick around longer, making us feel good longer, when we eat cacao.

A recent study showed that only one out of 500 people who thought they were allergic to chocolate actually tested positive. Allergies to chocolate are quite rare. It is typically the case that the person is in fact allergic to milk and dairy products.

THE ABOVE INFORMATION THANKS TO:http://www.detoxyourworld.com/acatalog/cacao.html

MORE FASCINATING READING ON THE SUBJECT!

THE ABOVE INFORMATION IS FOR EDUCATIONAL PURPOSES.
×