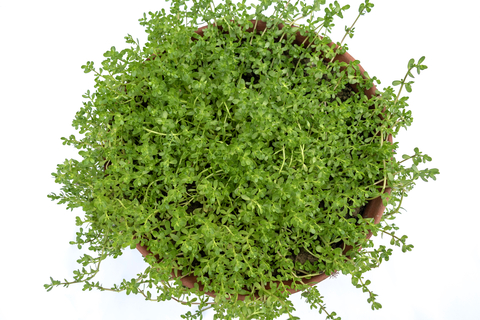 Introduction:  Brahmi is a perennial creeping herb with small white flowers. Its leaves are bright green and look almost like a succulent. It grows in damp, marshy areas, in both fresh and brackish water. It is commonly found throughout Southeast Asia, but has since migrated with great success to Florida and several other southern states in the US. Because of it's easy adaptability, it is a favorite foliage for aquariums both big and small.

Constituents:  The active principle is Hersaponin, which resembles resperpine and chloromazne in its central action.

Parts Used:  The whole herb can be used.

Typical Preparations:  As a tea, extract, as a culinary additive in certain Asian dishes.

Summary:  Brahmi has a bitter and pungent flavor. It has been used since the 6th century C.E. in Ayurvedic medicine and is considered the foremost tonic for the nervous system and general cognition. Historically it has been used to treat a variety of ailments including asthma, epilepsy, leprosy, indigestion, memory retention and as a mild sedative. A recent study in Australia has shown that it had a significant effect on the retention of new information.

For educational purposes only.This information has not been evaluated by the Food and Drug Administration. This information is not intended to diagnose, treat, cure, or prevent any disease.