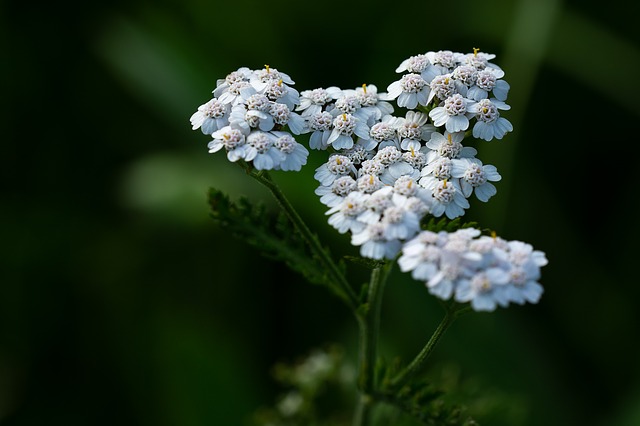 Introduction
Yarrow is a long-stemmed member of the sunflower family found in the wild throughout the temperate regions of the Northern Hemisphere. It can be recognized by its highly segmented leaves (millefolium literally means "thousand leaves"), and the clusters of daisy-like white or lavender flowers at the top of the stalk. Greek myth had it that Achilles painted himself with a tincture of yarrow to make himself invulnerable to arrows, everywhere on his body except his heel. Native American herbal medicine makes extensive use of yarrow. Among the Micmac people of Maine, New Brunswick, and Nova Scotia, the stalk was chewed or stewed to induce sweating to "break" fevers and colds. They also pounded the stalks into a pulp to be applied to bruises, sprains, and swelling. The Cherokee, Gosiute, Iroquois, and Mohegan peoples used yarrow as a digestive aid. Other herbal healing traditions use yarrow to treat a variety of conditions characterized by swelling, often combined with echinacea, elder flower, ginger, and peppermint.

Typical Preparations
Tea infusions, juice (from the fresh herb), tinctures, as a compress, and in baths.

Rebecca comments:
Not mentioned here, my favorite feature of yarrow is its ability to affect blood flow, both with regard to hemmorhage or - the opposite - thinning blood that is too thick. Matthew Wood is the herbalist who first brought this to my attention in his Book of Herbal Wisdom: Using Plants as Medicine. In that book he gives an account of a gentleman who suffered an accident with an ax while alone in the woods. He immediately picked yarrow, chewed it, and filled the gaping wound (open to the bone). The blood flow stopped almost immediately. Yes, I find a description of this feature of yarrow here, interestingly enough, by another Herbalist named Rebecca:

"Yarrow is amphoteric, which means it can have opposite healing traits. Yarrow is astringent, and in most cases, it can stop bleeding, in other cases it can move blood. Yarrow has been traditionally used to treat fevers, colds, winter illnesses and also assists the healing of inflammation, circulation and muscle aches; specifically for cuts, bruises, blood blisters, scrapes and deep wounds (even to the bone). Yarrow is also a good medicine for certain types of female menstrual ailments, such as cysts and regulating menstrual flow. Hemorrhoids can also be helped with use of Yarrow. Because of its bitter quality, it can be used in moderation in digestive formulas. A few more interesting facts about Yarrow are that it relieves pain and assists relaxation."

Precautions
Use with caution if you are allergic to ragweed. Its use is not recommended while pregnant.