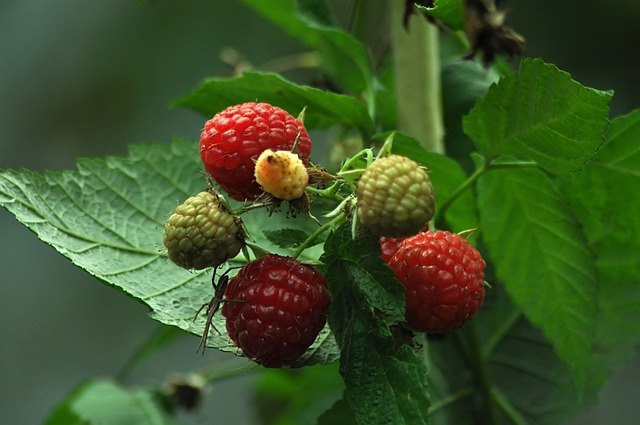 Raspberry leaves are among the most pleasant-tasting of all the herbal remedies, with a taste much like black tea, without the caffeine. Raspberries were said to have been discovered by the Olympians gods themselves while searching for berries on Mount Ida. Raspberries are indigenous to Asia Minor and North America, with the first real records of domestication come from the writings of Palladius, a Roman agriculturist. By Medieval times it had a great many uses, including the juices which were used in paintings and illuminated manuscripts. King Edward the 1st (1272-1307) was said to be the first to call for mass cultivation of raspberries, whose popularity spread quickly throughout Europe. Teas of raspberry leaves were given to women of the Cherokee, Iroquois, and Mohawk nations in North America, and have earned approval of the authoritative British Herbal Compendium.

Dried leaf. Raspberry leaves gathered in spring before the plant flowers have the highest antioxidant content.

Tea. To make raspberry leaf tea, pour 1 cup (240 ml) of boiling water over 1 or 2 teaspoons (3-5 grams) of dried leaf. Close the teapot and allow to stand for 10 minutes, then sweeten to taste. During pregnancy, drink 2 to 3 cups daily. Drink warm. Raspberry leaf tea can be mixed with slippery elm powder to make a soothing poultice for minor burns and skin infection. Some herbalists make tinctures of raspberry leaf with Partridgeberry for use by expectant mothers. Many herbal teas include raspberry to "stabilize" the other ingredients. May also be taken as a capsule, though rare.

Raspberry leaf tea has been used for centuries as a folk medicine to treat canker sores, cold sores, and gingivitis in persons of all ages and anemia, leg cramps, diarrhea, and morning sickness in pregnant women, and as a uterine relaxant. Commentators frequently state that recent scientific research found no benefit in raspberry tea for expectant mothers, but this is not correct. The study published in the Journal of Midwifery and Women's Health in 2001 found that women who drank raspberry leaf tea had shorter labor, and fewer of their babies were delivered by forceps. The other study, published in the Australian College of Midwives Journal, cited in The Natural Pharmacist as saying there was "no" benefit to the herb for pregnant women, actually stated: "The findings also suggest ingestion of the drug might decrease the likelihood of pre and post-term gestation. An unexpected finding in this study seems to indicate that women who ingest raspberry leaf might be less likely to receive an artificial rupture of their membranes, or require a caesarean section, forceps or vacuum birth than the women in the control group." In other words, scientific studies show that drinking raspberry tea actually is beneficial during pregnancy.

Precautions: Safe dosages for children under the age of 6 and for persons with liver or kidney disease have not been established.