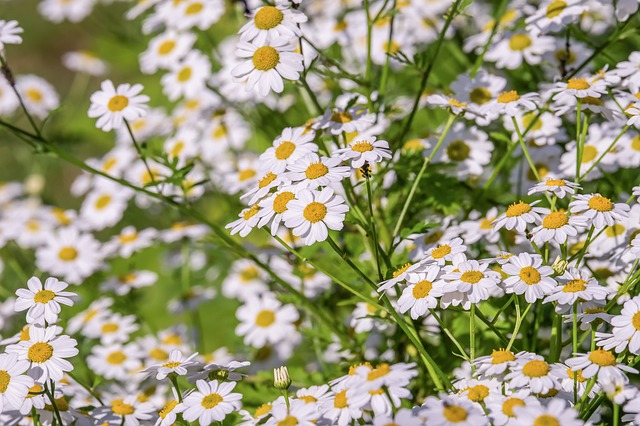 Introduction  Chamomile is a low-growing relative of the sunflower native to Eastern Europe and now found around the world. It is especially abundant in Hungary, Croatia, and Serbia, although chamomile grown in Egypt has an exceptionally high content of essential oils. Chamomile was used as a medicine by the Egyptians, Greeks, and Romans. Its name derives from the Greek chamos (ground) and melos (apple), referring to its creeping habit and the apple scent of fresh blossoms. Extensive research has confirmed the plant's usefulness in treating minor abrasions, cuts, and scrapes, and as a sedative and sleep aid. In the US, chamomile is one of the most widely used herbal ingredients in teas as well as in cosmetic, health, and beauty aid products. The amount of chamomile imported into the US each year is between 750,000 and one million pounds, with an estimated 90% used in teas. In commerce, chamomile is often called German chamomile or Hungarian chamomile, which not to be confused with the rare, and more costly, Roman or English chamomile (Anthemis nobilis/Chamaemelum nobile)

Summary  The traditional use of chamomile tea is to induce a deep sleep, an effect confirmed in a study of patients undergoing cardiac catheterization. Chamomile stops spasms in the smooth muscles lining the stomach and intestines, and contains chemicals that are anti-inflammatory, antibacterial, antiviral, and antiparasitic. One hint for best results: Always brew chamomile tea in a closed container, especially if you live at a high altitude.