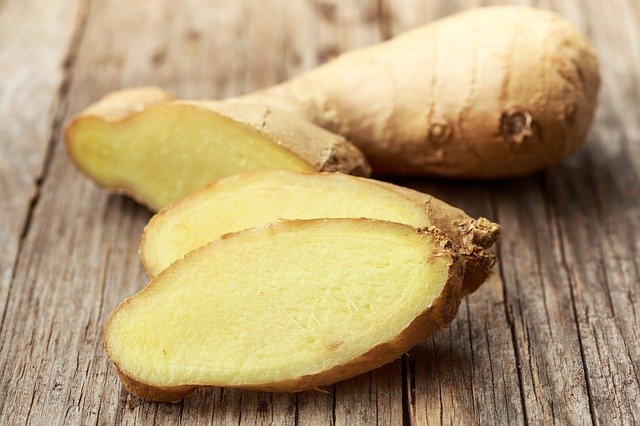 Introduction  Ginger is the most widely used and available herbal remedy on the planet, with billions of people using it every day as both food and medicine. A tropical perennial growing to a height of two feet, ginger has lance-shaped leaves and bears stalks of white or yellow flowers. Ginger has long been the subject of fable and literature. For centuries, Europeans obtained ginger form Arab spice traders, who protected their sources by inviting stories of ginger field located in lands stalked by a fierce people called troglodytes. And Shakespeare wrote in Love's Labour Lost, "had I but one penny in the world thou shouldst have it to buy ginger-bread." Ginger is used either fresh or dried in nearly two thirds of all traditional Chinese and Japanese herbal formulas. Fresh ginger is used to relieve dryness and heat, while dried ginger is used to relieve dampness and chill. In Traditional Chinese Medicine, ginger is said to "rescue devastated yang," a condition in which invading cold or infection has reached the interior of the body. Ginger warms the energy channels and stops bleeding, especially uterine bleeding. It is a detoxifier, and is always included in formulas with potentially toxic herbs such as aconite, acorus, and pinellia.

Typical Preparations  Teas, tinctures, encapsulations, in herbal formulas, and in cooking. First-time users of ginger tend to use too much. To make ginger tea, simmer 3/4 teaspoon (0.5 to 1.0 grams) of chopped ginger in 1 cup of hot water for five minutes in a closed teapot. To treat asthma, use an alcohol-based tincture rather than a tea.

Summary  Scientists have found evidence to support ginger's wide range of medicinal actions. These actions include the lowering of cholesterol levels, relief for allergies and asthma, arthritis, colds, and nausea; and protecting the digestive tract and liver against toxins and parasites. Ginger inhibits cholesterol production in the liver, which makes up to 85% of the cholesterol in circulation in the blood stream. Ginger also decreases the activity of platlet-activating factor (PAF), a clotting agent that creates the clot that can result in heart attack of stroke. Ginger's ability to reduce PAF activity also makes the herb effective against allergies and asthma. PAF, which stimulates the inflammation seen in allergy and the bronchial constriction seen in asthma becomes more active when fat is consumed. Dried ginger, especially dried ginger tinctures, can offset this effect. In a clinical trial in India, the consumption of 5 grams (5 teaspoons) of dried ginger per day for seven days reversed blood lipid elevation caused by daily consumption of 100 grams (3-12/ ounces) of butter.

Ginger relieves the pain of rheumatoid arthritis by stopping the immune system's production of inflammatory leukotrienes. Ginger's effects against infection have also been confirmed by laboratory science. One ginger compounds kills cold viruses at a concentration of less than one part per million, a concentration to that found in raw ginger. Ginger contains a chemical called zingibain that dissolves parasites and their eggs. This antiparasitic effect is put to use preparing sushi. Sushi is traditionally eaten with pickled ginger, and ginger extract have been shown to kill the anisakid worm, a parasite sometimes carried in raw fish, within sixteen hours. In addition, ginger tea effectively treats schistosomiasis, a parasitic disease increasingly prevalent among tourists returning to North America, Australia, and Europe from lesser developed areas of the tropics. Ginger can protect the lining of the stomach from alcohol damage, which aggravate existing ulcers and promote the development of new ones.

Ginger is especially useful in small doses in pregnancy. Some babies are born breech, that is, feet first instead of head first. Chinese researcher report that simply applying a ginger paste to a specific acupuncture point results in a 77-percent correction of breech births, compared to a 52 percent correction in women in the control group who had their babies turned manually. Ginger is also an age-old remedy for morning sickness. When used in herbal formulas, ginger protects the body from carcinogenic effects of valproic acid (Depakote), a medication commonly prescribed for migraine and seizure disorders.

Precautions  Although there are warnings in both Traditional Chinese Medicine and some medical texts about using ginger during pregnancy, ginger used in moderation, that is 3/4 teaspoon up to three times a day, poses no risk to mother's or baby's health. Studies in the late 1990's found that eating as much as 2 to 3 tablespoons of raw ginger or 5 to 8 tablespoons of dried ginger daily will not stimulate uterine contraction. Excessive use may cause gastro-intestinal upset.