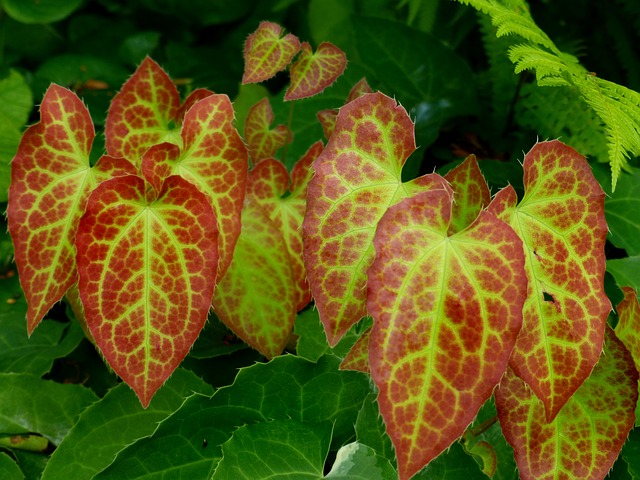 Introduction Epimedium is an ivy-like ground shrub of the higher and drier areas of China and Tibet. It is in the same plant family as Barberry and Oregon Grape, and Its first recorded use is circa 200 B.C.E. in China. The name of the herb in Mandarin, yin yang huo, roughly corresponds to "weed for licentious goat." Legend has it that a goat herder discovered the properties of epimedium by observing his billy goats' uncontrollable sexual appetites after they grazed on the herb. In Traditional Chinese Medicine Epimedium is used to increase the Yang (outwardly directed energies) when there is not a deficiency of Yin (containing energies). For instance, it would be used to enhance male sexual performance, but not in a man taking a diuretic, such as Lasix (furosemide). It has traditionally been regarded as acrid and sweet tasting, but then warming, and it has been historically used according to Chinese Medicine to benefit the kidneys, bones, tendons, muscles, mental fatigue, and poor memory.

Typical Preparations  Teas, tinctures, encapsulations of the leaf or powder.

Summary Modern Chinese herbal medicine uses Epimedium (usually in combination with other herbs) not just to treat impotence, but also for asthma, bronchitis cervical dysplasia, congestive heart failure, leukorrhea, leukopenia, and viral infections of the heart. Exactly how the herb works is not known, but laboratory studies with animals suggest that it increases production of the pleasure chemical dopamine and decreases production of the stress hormone cortisol. The effects on male sexual performance are most closely tied to the chemical icariin, but the whole herb rather than a product standardized for icariin alone is needed for best effect. The herb also contains some of the same chemicals found in various "corti-slim" products.

Rebecca Comments Epimedium grandiflorum has phosphodiesterase-5 (PDE5) inhibition properties.  Wellknown pharmaceutical PDE5 inhibitors include the popular drugs Viagra, Cialis, and Levitra.  PDE-5 is an enzyme that decrades cAMP (cyclic adenosine monophosphate) and cGMP (cyclic guanosine monophosphate).  When this degradation process is inhibited - as with the use of PDE5-inhibitors - then nitric oxide production increases, resulting in a relaxation of the blood vessels.  So far, up to 10 families of phosphodiesterase enzymes have been identified.  Some drugs and natural agents are specific to particular enzyme families, while others are non-specific.  Some of the natural non-specific PDE-inhibitors are bilberry, acai berry, ephedra, citrus aurantium, caffeine - there are others.  Pharmaceutical products that are non-specific PDE-inhibitors include theophyllin, aminophyllin, pentoxifyllene, among others.

When cAMP levels are low, cells can multiply much too fast, as seen in skin diseases such as psoriasis and in some cases contributing to the cellular proliferation found in tumor growth.  Currently, Johns Hopkins is conducting a study using the pharmaceutical PDE-5 inhibitors (i.e., Viagra) in combination with other agents to treat HPV+ (human papilloma virus-positive) cancers of the head and neck (the most common HPV+ cancer is cervical cancer). To read about this exciting study, please click here.

Precautions  Take no more than the recommended dose. More is not necessarily better. Maximum erectile strength is possible when blood pressure is normal and taking an excess of Epimedium may increase blood pressure and heart rate but does not have an incrementally increasing effect on erection. Not recommended for long term use.

For educational purposes only.  This information has not been evaluated by the Food and Drug Administration. This information is not intended to diagnose, treat, cure, or prevent any disease.

Except for Rebecca's personal comments, this information courtesy of MOUNTAIN ROSE HERBS, with full, written permission for reuse.