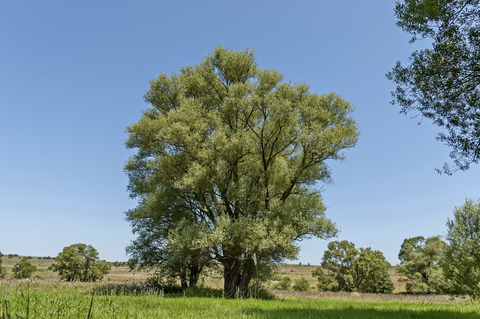 Introduction
Native to North America, northern Asia, and much of Africa, the white willow is a low-growing deciduous tree bearing long, green, tapering leaves and catkins in spring. Bark is stripped from young trees in the spring for use in herbal medicines. Willow bark is the grandmother of aspirin and many other medications for arthritis and rheumatism. Almost two thousand years ago, the Greek physician Dioscorides used willow bark to sooth the pain of inflamed joints. Native American healers used willow bark long before Columbus or the Vikings landed. The conversion of willow bark to aspirin began in 1828 when a German chemist isolated the active ingredient and named it salicin. In 1899, the Bayer company began manufacturing and selling a modified form of the willow bark chemical acetylsalicylic acid, or aspirin. This first of the modern miracle medicines has been a mainstay in the treatment of joint pain ever since. Willow bark is a proven painkiller appropriate for colds, fevers, minor infections, headache, arthritis, and pain caused by inflammation.

Typical Preparations
Most commonly used in tea preparations, and equally convenient as a capsule or extract. Also used to make lozenges, and salicin tablets.

Summary
The analgesic action of willow bark depends on symbiotic or "friendly" intestinal bacteria to digest is components into painkilling forms. Aspirin does not require digestion by intestinal bacteria, and works more quickly. Willow bark, on the other hand, continues to provide pain relief longer than aspirin. Unlike aspirin, the salicylates in willow bark do not increase the risk of bleeding. They do not usually irritate the lining of the stomach. For these reasons, willow bark may be useful for people who have chronic joint pain but cannot take NSAIDs or COX-2 inhibitors.

Precautions
Native American herbal medicine used willow bark to diminish sexual desire. Long-term, daily use of willow bark will reduce sexual desire, although it will not alter sexual performance in either men or women. Do not use willow bark if you are allergic to aspirin, and do not give willow bark to a child under sixteen years of age who has symptoms of any kind of viral infection, especially flu or chickenpox.