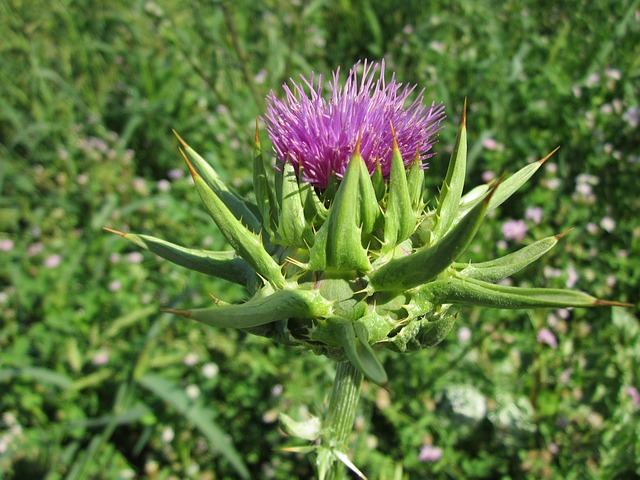 Introduction  Milk thistle is a member of the sunflower family native to a narrow area of the Mediterranean but grown for centuries throughout Europe and now a common weed in California. Milk thistle was probably brought to North America as a coffee substitute, but its shiny black seeds covered with feathery tufts have a far longer history in herbal medicine. The edible thistles were given the name silybum by Dioscorides, a Greek physician who served in the Roman Army over 1,900 years ago. The thistle with white mottling on its leaves became known as the "milk" thistle. This herb served as a therapy for conditions we would now recognize as ascites, congestive heart failure, various kidney diseases, and hepatitis. In Catholic Germany, its usefulness was said to be second only to calling on Mother Mary, and the white mottling on the leaf said to be the touch of the Virgin Mary's milk, hence the species name "marianum." In the twentieth century, German physicians and pharmacologists found that milk thistle could treat certain mushroom poisoning, fatty liver due to alcoholism, cirrhosis, and hepatitis B and C. Much of the research involved a proprietary formula developed by the German natural products maker Madaus, but the authoritative Complete German Commission E Monographs also recognized the usefulness of the whole herb.  More recently, it has been discovered that milk thistle's liver-detoxifying properties are primarily attributed to its ability to raise glutathione. levels.

Typical Preparations  Whole seeds or seed powder, encapsulated or used to make an infusion. The most convenient form has been either an alcohol or glycerin extract.

Summary  There is a tendency among herbalists to think of milk thistle seed and silymarin as synonymous. For instance, The Expanded German Commission E Monographs notes the historical uses of the whole herb for treating "Congestion of the liver, spleen, and kidneys" and in the very next paragraph states, "Milk thistle is an example of a preparation that is required to be in the standardized, concentrated form in order to fully convey the desired, in this case, hepatoprotectant, effects." This isn't necessarily so. There's no doubt that silymarin extract delivers more silymarin than the same amount of milk thistle. This is because only about 10% of the silymarin in the seed can be absorbed by the digestive tract, and the seed is only up to 3% silymarin. However, since the customary dose of the whole herb is 12 to 15 grams (up to 3% silymarin) and the customary daily dose of silymarin extract amounts to 200 to 400 milligrams of silymarin, you actually get an effective dose of silymarin by taking whole milk thistle seed three times a day. There are other reasons to use the milk thistle seed (whole or ground) rather than silymarin extract. Even when an herb is used to treat a serious health condition, the whole herb often has a more balanced effect. The milk thistle extract silymarin, for instance, has proven usefulness in treating liver disease. The drawback to using silymarin is that, if the doctor prescribes other drugs, such as steroids, silymarin can interfere with the liver's ability to detoxify them. Milk thistle seed has the same healing effect on the liver without interfering with the organ's ability to detoxify drugs or environmental chemicals, and a side benefit of normalizing blood lipids as the liver heals.

Precautions  Like silymarin extract, milk thistle seed can cause mild diarrhea by stimulating the release of bile. This effect is most notable if there is a high-fat diet.

For educational purposes only This information has not been evaluated by the Food and Drug Administration.  This information is not intended to diagnose, treat, cure, or prevent any disease.