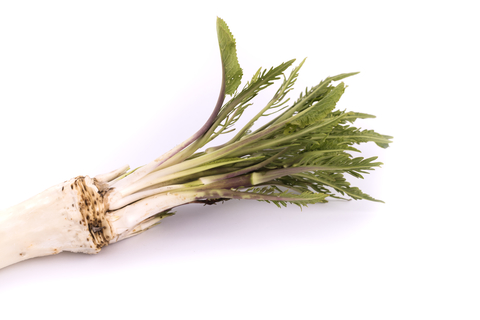 ---Habitat--- This plant has been in cultivation from the earliest times, but its exact place of origin seems to be obscure. Hooker considers that it is possibly a cultivated form ofCochlearia macrocarpa, a native of Hungary; other authorities consider it indigenous to the eastern parts of Europe, from the Caspian and through Russia and Poland to Finland. In Britain and other parts of Europe from Sicily northwards, it occurs cultivated, or semi-wild as a garden escape. It is probably the plant mentioned by Pliny under the name of Amoracia, and recommended by him for its medicinal qualities, being then apparently employed exclusively in physic, not as food or condiment It is possible that the Wild Radish, or Raphanos agrios of the Greeks was this plant It is said to be one of the five bitter herbs, with Coriander, Horehound, Lettuce and Nettle. which the Jews were made to eat during the Feast of Passover.

Both the root and leaves of Horseradish were universally used as a medicine during the Middle Ages, and as a condiment in Denmark and Germany. It was known in England as 'Red Cole' in the time of Turner (1548), but is not mentioned by him as a condiment. Gerard (1597), who describes it under the name of Raphanus rusticanus, states that it occurs wild in several parts of England, and after referring to its medicinal uses, goes on to say:'the Horse Radish stamped with a little vinegar put thereto, is commonly used among the Germans for sauce to eate fish with and such like meates as we do mustarde,' showing that the custom was unfamiliar to his countrymen, with whom the root had not yet passed from a drug to a condiment. He mentions this plant as an illustration of the old idea of 'Antipathies,' saying:'Divers thinke that this Horse Radish is an enimie to Vines, and that the hatred between them is so great, that if the rootes heerof be planted neere to the vine, it bendeth backward from it as not willing to have fellowship with it.'

Nearly half a century later, the taste for Horseradish as a condiment had spread to England, for Parkinson, writing in 1640, describes its use as a sauce 'with country people and strong labouring men in some countries of Germany,' and adds 'and in our owne land also, but, as I said, it is too strong for tender and gentle stomaches,' and a few years later, in 1657, Coles states as a commonly-known fact, 'that the root, sliced thin and mixed with vinegar is eaten as a sauce with meat, as among the Germans.' That the use of Horseradish in France was in like manner a custom adopted from their neighbours, is proved by its old French name,Moutarde des Allemands.

The root was included in the Materia Medica of the London Pharmacopoeias of the eighteenth century, under the name of R. rusticanus, the same name Gerard gave it. Its present botanical name, Cochlearia Armoracia, was given it by Linnaeus, Cochleare being the name of an old-fashioned spoon to which its long leaves are supposed to bear a resemblance. The popular English name, Horseradish, means a coarse radish, to distinguish it from the edible radish (R. sativus), the prefix 'Horse' being often used thus, comp. Horse-Mint, Horse Chestnut. It was formerly also known as the Mountain Radish and Great Raifort.

---Cultivation---To grow fine Horseradish roots a plot of tilled ground must be chosen, manure being placed 18 to 24 inches deep; the ground in which they are planted ought to be very rich, or they will not thrive.

In order to obtain good sticks for winter an early start must be made, and some time in January the ground should be deeply dug. Planting is carried out in February by means of root cuttings, straight, young roots, 8 or 9 inches long, and about 1/2 inch wide being chosen, each having a crown or growing point. Make deep holes with the dibber, 12 to 15 inches deep and 12 to 18 inches apart each way; carefully divest the sets of all side roots and drop each in a hole, trickling a little fine soil round them before filling up the holes firmly. Beyond hoeing to keep the soil clear of weeds, no further care is needed.

During winter, the crop may either be lifted or stored like Beetroot, or the roots be lifted as required. In the latter case, the ground must be protected in frosty weather. The roots may be preserved for some time in their juicy state by putting them in dry sand.

It is necessary every few years to replant the bed, otherwise the crop deteriorates. The plants will stand through two seasons without deterioration. They may either be replanted elsewhere or another bed made on the same site, just as may be expedient. When it is desired to destroy plantations of Horseradish, it is absolutely necessary to rid the soil of even the smallest particle of root: if this is not done, much annoyance will be caused the following summer.

---Part Used---The root is the only part now used, and in the fresh state only. It is nearly cylindrical, except at the crown, where it is somewhat enlarged.

---Constituents---When unbroken, it is inodorous, but exhales a characteristic pungent odour when scraped or bruised, and has a hot, biting taste, combined with a certain sweetness. It has properties very similar to Black Mustard seeds, containing Sinigrin, a crystalline glucoside, which is decomposed in the presence of water by Myrosin, an enzyme found also in the root, the chief produce being the volatile oil Allyl, isothiocyanate, which is identical with that of Black Mustard seed. This volatile oil, which is easily developed by scraping the root when in a fresh state, does not pre-exist in the root, the reaction not taking place in the root under normal conditions, because the Sinigrin and Myrosin exist in separate cells, and it is only the bruising of the cells that brings their contents together.

The oil is highly diffusible and pungent on account of the Myrosin contained, 1 drop being sufficient to odorize the atmosphere of a whole room. On exposure to the air, the root quickly turns colour and loses its volatile strength. It likewise becomes vapid and inert by being boiled. It contains also a bitter resin, sugar, starch, gum, albumin and acetates.

---Medicinal Action and Uses---Stimulant, aperient, rubefacient, diuretic and antiseptic. It is a powerful stimulant, whether applied internally or externally as a rubefacient, and has aperient and antiseptic properties. Taken with oily fish or rich meat, either by itself or steeped in vinegar, or in a plain sauce, it acts as an excellent stimulant to the digestive organs, and as a spur to complete digestion.

It is a very strong diuretic, and was employed by old herbalists in calculus and like affections. It is useful in the treatment of dropsy. Boerhaave recommended it to be given in scurvy when there was not much fever, and administered it for various other complaints.

An infusion for dropsy is prepared by pouring 1 pint of boiling water on 1 OZ. of Horseradish and 1/2 oz. of Mustard seed, crushed. The dose is 2 to 3 tablespoonsful three times a day.

The chief official preparation of Horseradish in the British Pharmacopoeia is Comp. Sp. Horseradish; a fluid extract is also prepared. A compound spirit of Horseradish may be prepared with slices of the fresh root, orange peel, nutmeg and spirit of wine, which proves effective in languid digestion, as well as for chronic rheumatism, 1 or 2 teaspoonsful being taken two or three times daily after meals with half a wineglassful of water.

The root is expectorant, antiscorbutic, and if taken too freely, emetic. It contains so much sulphur that it is serviceable used externally as a rubefacient in chronic rheumatism and in paralytic complaints. Culpepper says.: 'If bruised and laid to a part grieved with the sciatica, gout, joint-ache or hard swellings of the spleen and liver, it doth wonderfully help them all.' A poultice of the scraped root serves instead of a mustard plaister. Scraped horseradish if applied to chilblains, secured with a light bandage, will help to cure them. For facial neuralgia, some of the fresh scrapings, if held in the hand of the affected side, will give relief - the hand in some cases within a short time becoming bloodlessly white and benumbed.

When infused in wine, Horseradish root will stimulate the whole nervous system and promote perspiration.

An infusion of sliced Horseradish in milk, by its stimulating pungency and the sulphur it contains, makes an excellent cosmetic for the skin when lacking clearness and freshness of colour. Horseradish juice mixed with white vinegar will also, applied externally, help to remove freckles. The same mixture, well diluted with water and sweetened with glycerine, gives marked relief to children in whooping-cough, 1 or 2 desertspoonsful being taken at a time. Horseradish syrup is very effectual in hoarseness: 1 drachm of the root, fresh scraped, with 4 oz. of water, is infused two hours in a close vessel and made into a syrup with double its weight in sugar. The dose is a teaspoonful or two, occasionally repeated.

If eaten at frequent intervals during the day and at meals, Horseradish is said to be most efficacious in getting rid of the persistent cough following influenza.

Horseradish was formerly much employed as a remedy for worms in children. Coles says: 'Of all things given to children for worms, horseradish is not the least, for it soon killeth and expelleth them.'