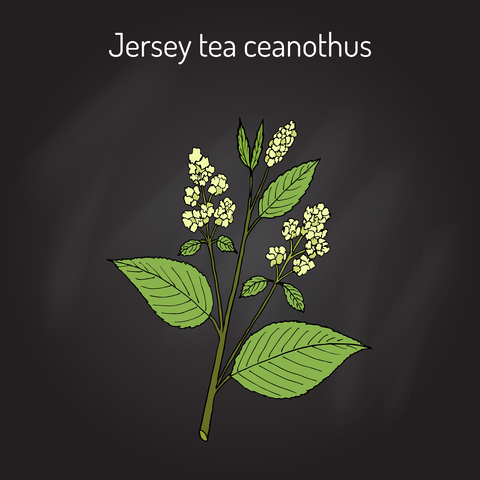 Red root is a shrub also known as wild snowball for its clusters of white flowers borne in early summer. Its root is bitter and its root tea has a "bite." Red root was used as a substitute for tea during the American Revolutionary War. A native of North America and Russia, Native American tribes used it to treat skin cancer, skin lesions, and venereal sores, as well as problems arising from bronchial problems. Traditional Chinese herbalists used it to support the lymph system. As an astringent, it has been used to help shrink tissue. It has proven useful in mouthwashes to relieve sore throat and to help reduce dental plaque.

Teas, tinctures and in capsule form. Also used as a natural dye.

Red root gargles stop sniffling and salivation associated with colds, flu, bronchitis, and asthma. The herb is also used in teas to stop dribbling of urine caused by urinary tract infection. The roots and root bark of New Jersey tea was used extensively by the North American Indians to treat fevers and problems of the mucous membranes such as catarrh and sore throats. Current day usage of the roots concentrates on their astringent, expectorant and antispasmodic actions and they are employed in the treatment of complaints such as asthma, bronchitis and coughs. As an astringent, it has been used to help shrink tissue. As an expectorant, it has been used to loosen phlegm in the lungs, and to alleviate the discomforts of chronic bronchial issues.

Precautions:  Should not be taken by pregnant or nursing women as it may interfere with the absorbtion of iron and other minerals.