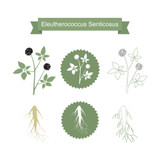 ELEUTHERO ROOT - For more detailed information, click on the link...

Summary: Eleuthero is an "adaptogen," an agent that helps the body address to stress. Scientists believe it helps prevent "adrenal burnout" caused by ongoing physical or mental challenges. Eleuthero boosts concentration and focus without the letdown than comes from drinking coffee or other sources of caffeine. Eleuthero also boosts immunity. Healthy people taking 2 teaspoons (10 ml) of tincture three times daily have been shown to have increased numbers of the immune cells (CD4+ cells) that have decrease during HIV-infection and AIDS. Eleuthero may also enhance athletic performance. Eleuthero was a favorite of trainers and coaches of Olympic athletes in the old Soviet Union. When the word about eleuthero got out, Western scientists put it to the test. A study of six baseball players found that taking eleuthero for 8 days increased breathing capacity. That is, eleuthero gave the players more wind to sprint between bases. In another clinical test, scientists in Australia found that men (and women) who took eleuthero 8 weeks had 13% strength gains in the pectoral muscles and 15% in the biceps. And a company in New Jersey found that taking eleuthero for 8 weeks increased the body's ability to burn fat through exercise by about 43%. The scientists running these tests recruited experienced athletes. The benefits of this readily available herb are even more noticeable in beginning athletes. Just be sure to take the herb for at least 8 weeks for best results. Combining eleuthero with other herbs can be even better. Soviet scientists found taking both schisandra and eleuthero benefited endurance athletes by giving them an immune system boost. The two herbs together helped prevent colds, flu, and other infections after athletic events. Eleuthero is not the only herb for athletes. American trainers report a combination of sea buckthorn, wild oats, and stinging nettle increases strength, anaerobic power (muscle output when the athlete is out of breath), endurance time, and even feelings of well being. For best results, increase the vitamin C foods in your diet when you take these herbs.

Precautions: May cause insomnia if taken too close to bedtime. Not recommended for persons with uncontrolled high blood pressure.

Suggested Use: Shake well. Twelve years and older, add 1-4 ml (15-60 drops) to a small amount of water and drink. Use 3-4 times daily as needed. To evaporate alcohol before drinking, add to a cup of heated water (no microwave!) and allow to sit for ten minutes before drinking. If an herb is appropriate for children, herb doses for children under 12 are typically 1/2 the adult dose; adjust by weight accordingly or check with a qualified practitioner.

*This statement not evaluated by the FDA. This product is not intended to diagnose, treat, cure, or prevent any disease.

Be the first to review this product.